Arielettes Get It Done at World Dance Championships in New Jersey 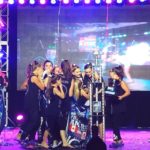 Dancers from Arielettes had placed in the top 10 for a world competition before, but they had never brought home a first-place trophy.

This year, the team from Marshall County did just that.

“This was one of the best moments of my life,” said Missi Ross, who has owned the dance studio for the past 26 years. “If I could live it again, I would.”

Two of the groups Ross took to the World Dance Championship placed in the final five for their routines. “Signed, Sealed and Delivered” took first place in the Intermediate Teen Large Group, while “Dance Like Your Daddy” won third place in the Junior Large Group. The competition was held Aug. 2-3 in Secaucus, New Jersey.

Ross said the studio competed against dance studios from across the world at the competition. They were among a class of dancers who had performed well in their regions prior to making it into the world championship.

“You had to win at a regional competition to qualify to compete at the World Dance Championship,” she said.

Prior to competing in New Jersey, the Arielettes competed at seven competitions throughout the tri-state area.

“‘Dance Like Yo Daddy’ was the top-scoring routine at Dayton, Ohio, and at the Capitol (Theatre) in Wheeling,” said Ross. “‘Signed, Sealed and Delivered’ kept winning, too.”

The average age for dancers in “Signed Sealed and Delivered” was 12, while “Dance Like Yo Daddy” competitors averaged about age 9.

It takes a full year of practicing and regional competitions to prepare for the championship.

“Every August, they begin their competition dance season with picking new songs and choreographing new routines, with the average competition kid having over 10 hours a week of dance class,” said Ross.

Parents say the dedication is worth the effort.

“I am proud to see the kids’ hard work and dedication pay off,” said Katy Shrunk whose daughter, Becca, is a member of group.

“These kids give up sleepovers and birthday parties, just to come to Arielettes to practice, without complaint,” he said.

The dancers say they love it, too.

“Winning was the best moment of my life,” said Adisyn Gessler, 11.

Kenzie Gray, 9, said she was excited to be at the championship event.

“I love competing,” said Gray. “It is better to have good competition, because then we try harder.”

Others didn’t expect the team would make it so far.

“We didn’t think we would win because we are from a small studio in a small town, and everyone else was from Pittsburgh, New York and even China,” said Kenzie Ross who, at 18, was one of the older members of the team. “But when we heard our names being called for first place, we all fell to our knees crying happy tears.”

Although most of the dancers are girls, Ezra Summers said he enjoyed the competition, too.

“I am the only boy on the team, but I had so much fun with the athletic part of it, and it was great ending to my first year to place in the final five at Worlds,” he said.

Although the calendar for the coming year is not final yet, Ross said she believes the dancers will perform again in Dayton during February 2019.