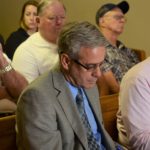 The lack of adequate septic systems in Hannibal, Sardis and Duffy topped the agenda for the Monroe County commissioners’ regular meeting Monday.

Wangler said those communities use septic tanks that are not working properly. He said there are older houses that do not have any septic systems. He also said the sanitary treatment in the area is poor and he suggests creating a cohesive plan for the three communities to have the same treatment plant. The treatment plant would be across the river in New Martinsville.

Thrasher and OLWS representatives suggested use of the gravity system for the plant. Wangler described the system as water flowing by gravity to pump stations and then transferred to the treatment plant. He said the gravity system would cost about $20.8 million.

“I recommend the gravity system because it operates on flexibility and low operational costs,” Wangler said.

Another option presented was the STEP system, which stands for Septic Tank Effluent Pumping. This would be a low pressure sewer system and consist of a small pipe, a holding tank and a pump system that takes wastewater from the home, collects and stores wastewater and then pumps it through the pipe into a larger collection system. The storage and pumping system would be located on the homeowner’s property. The STEP system cost estimate is $16 million.

“Well, if the gravity system is being recommended by everyone, I would say that’s the way to go instead of the STEP system,” Commissioner Tim Price said. “I just don’t know enough about these systems and I need to look into it more.”

Also discussed was affordability for residents.

“These people would be getting a sewer bill,” Wangler said. “They currently don’t have one and that would add on more pressure for them financially.”

It was also agreed that residents would need to be informed and voice their opinions before a decision is made on the project. Wangler said there are no plans for funding.

The next Monroe County commissioners meeting will be at 9 a.m. Sept. 4 — because of the Labor Day holiday — at the courthouse in Woodsfield.