SWA: Garbage Dumping Is to Blame 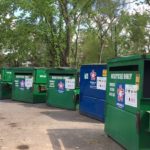 File Photo by Heather Ziegler These recycling containers located at Oglebay Park will be removed this week after debris was found inside, contaminating the recyclables. As a result, the Ohio County Solid Waste Authority has ended the public recycling effort for now.

Garbage has infiltrated two Ohio County Solid Waste Authority public drop-off recycling sites so much that the county is shutting down the collection points.

Tammy Bonar, executive director of the OCSWA, announced Tuesday the sites at Oglebay Park and in Clearview will no longer accept recyclables as a result of repeated contamination. Private businesses and Wheeling’s curbside recycling will remain intact.

“We can’t watch our sites all the time. We don’t have the means to do that, and as a result, people are dumping all kinds of stuff in there that contaminates it,” Bonar said Tuesday.

In recent weeks, someone has dumped construction materials, household trash and other non-recyclable items in the large, green recycling receptacles at the two county locations.

“The contamination levels at both the Oglebay Park and Clearview locations continue to be at levels that are unacceptable to the recycling facility,” Bonar said. “It’s so disappointing.”

She said she appreciates that so many in the recycling public have followed the rules clearly posted at the collection sites. However, it only takes one piece of the wrong trash to contaminate the bins.

The county recycling project has been operating for about 24 years, she said.

Republic Services, a national firm specializing in recycling and non-hazardous solid waste collections, contracts with the Solid Waste Authority to pick up the recyclables and transport them to the Green Star facilities in Pennsylvania for processing before being shipped to China.

Earlier this spring, Republic issued a letter to its customers regarding contaminated containers. Company officials noted the majority of recyclables collected in the United States are transported to China for final processing.

China has cracked down on the recyclables it accepts and absolutely refuses contaminated items.

Among the items that had been collected at the sites were paper goods including newspaper, brown paper bags, office paper, magazines and non-confidential mail. Books were not accepted nor were grocery bags, especially any colored bags.

Yet the recycling containers continued to be contaminated by dirty food containers and pizza boxes.

The containers will be removed from the two locations this week, Bonar said.

“There is clearly a demand for this, and we will continue to work toward a solution that will allow for a public dropoff recycling program that is effective, clean and secure,” Bonar added.