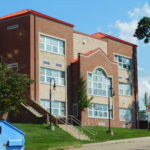 Students in some local school districts are experiencing abbreviated learning sessions this week due to high temperatures that are creating uncomfortable classroom conditions.

In St. Clairsville, where district officials are seeking passage of an 8.56-mill levy in November to generate $79.9 million levy for building and renovating school buildings, students were dismissed during the early afternoon Tuesday due to concerns about high temperatures in the old structures that do not have air conditioning.

The decision was made early Tuesday morning as administrators monitored weather forecasts and saw that the heat index would climb higher than 100 degrees Fahrenheit in the afternoon. According to Skaggs, the only classroom facility in the district that has air conditioning is a “connector” structure between the middle and high school buildings.

Skaggs believes students will be comfortable in their classrooms during the morning hours today, since fans were used overnight to air out and cool the structures. He said forecasts call for the temperature to peak between 2 and 4 p.m. today, so dismissing students two hours early will get them home before the hottest part of the day.

“It’s all about making sure we do what’s best for the kids,” Skaggs said.

He noted that school buildings cannot be opened up to allow air flow while students are inside the way they were when the parents of today’s students were children. He said security concerns prevent doors from being left open, and the windows in the structures will only open so far.

Parents across the district were notified of the schedule change via the One Call system, a software package that allows the district to send a single phone message to as many contact numbers as needed, Skaggs said. In addition to districtwide closings, the system also can be used to contact a selected audience, such as the families of children in a single building.

Skaggs, who has worked in the district for 22 years, recalls only a couple of other occasions when classes needed to be dismissed early due to extreme heat.

Superintendent T.C. Chappelear said a lack of comfortable air conditioning at Indian Creek High School and at both Wintersville and Hills elementary schools make it “impossible” for faculty, staff and students to work in those buildings, a news release states. At the same time, he said, it is not economically feasible for the middle school — the only site with adequate amenities — to remain open while the other buildings are closed. Chappelear said the cooling unit at Hills Elementary was down after being damaged by a lightning strike this summer.

“The bottom line is someone mentioned the buildings were like brick ovens in that they hold heat and they heat up all weekend,” he said. “The air conditioning down at Hills is broken, and the youngsters there don’t have the ability to dissipate the heat.”

The superintendent noted that the passage of a 6.1-mill levy this past spring should eliminate such problems in the future, with new high school and elementary buildings in Wintersville and the renovation of Hills in Mingo Junction by 2021-22.