Woman Admits Role in Arson at Bar in Mozart 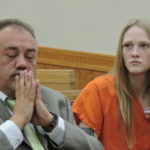 One of three people charged with an alleged collaborative arson at McGovern’s Bar in Mozart entered a guilty plea Monday morning.

Kayla McCloud, 21, of Powhatan Point, was charged with and pleaded to conspiracy to commit arson in connection to the destruction of the bar in February. McCloud allegedly assisted Codi Daugherty in burning down the bar owned by Mike McGovern. Both Daugherty and McGovern head to trial in October.

Another charge of second-degree arson against McCloud was dropped as part of her plea deal.

McCloud was seen on video camera hanging out around the bar around 4 a.m. the day of the arson. She was seen cleaning the bar and milling around the area. McCloud testified to her involvement with the plan to burn down the bar. She initially claimed to be ignorant of any plan.

After Marshall County Circuit Judge David Hummel accused her of lying and demanded she try again, she told him McGovern approached Daugherty to burn down the bar weeks prior. McGovern allegedly promised him some of the insurance money as payment.

“I didn’t want to believe they were going to do it,” she said. “They thought (Daugherty) was the only one crazy enough.”

At Hummel’s pressing, McCloud admitted she had known for weeks that McGovern and Daughter were arranging the plan and had done nothing. After leaving the bar earlier that night to go change a tire, they came back with a sledgehammer and several propane tanks, she said. McCloud said she did not question why he had brought those items because she said she was used to Daugherty’s strange behavior.

She then told Hummel, from her perspective, details of the events that unfolded.

“I didn’t think they’d go through with it,” McCloud said. “I thought maybe he’d go up, say he tried to do it, and wouldn’t actually go through with it. … I just remember Mr. McGovern said, ‘You won’t get hit with this,’ because Codi wasn’t working. We were both addicted, and he just kept promising.”

Conspiracy to commit arson carries a sentence of one to five years in prison. The plea agreement would allow McCloud to withdraw her guilty plea after completing probation, in lieu of a suspended prison sentence.

Hummel also allowed McCloud to remain out on post-conviction bond so she can attend a drug treatment program in Florida. Hummel also agreed to McCloud’s release to keep her available to appear in court in Belmont County. Police records indicate she was arrested Aug. 20 by the Belmont County Sheriff’s Office for possession of a controlled substance and child endangerment.

“She had a charge in Belmont County, which is what caused her bond to be revoked,” said her attorney, Kevin Neiswonger. “Our intention was to reinstate her bond, but she can’t be released while Belmont County has a retainer lodged against her. … She’ll have to deal with whatever she has to do in Belmont County before she can go to Florida.”

Hummel deemed the situation “interesting,” and scheduled a status hearing for October to reassess it.