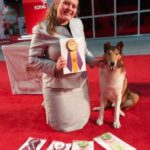 When it comes to working with a top dog, Sarah Fox has got it handled.

Fox, the daughter of Jim and Neva Fox of Rayland and a junior in the culinary arts program at Jefferson County Joint Vocational School, took her 4-year-old smooth collie to the American Kennel Club National Championship Dog Show in Orlando, Fla., on Dec. 16, where he placed first for his breed out of 21 contenders and is in the running to become first in the country in his class. Now, they will be featured when the dog show is set to air on the Animal Planet TV network at 6 p.m. today.

The Buckeye Local High School student began her journey at age 8 by showing a dog at the Jefferson County 4-H, but Bandit, who is co-owned by Robin Reed, Virginia Reed Mehr and Joann Thomas, showed potential for something more. Fox has taken him to shows each weekend for the past two years, traveling to Michigan, New York, Maryland and Virginia. During that time, they have attended the prestigious Westminster Dog Show and the Purina Nationals and earned such honors as No. 1 Junior Collie Handler, No. 1 All Breed Smooth Collie, No. 4 Breed Smooth Collie and No. 1. Owner Handler Breed in the country.

“You work every day with them while they are puppies,” she explained of the training, saying Bandit’s wins could put him in line for a very distinctive spot. “He gets points towards being in the Top 10 in the country and may be No. 1 in the country. His stats come in February but he’s in the Top 10 for his breed.”

Fox said both she and her parents were delighted by their success. “They think it’s pretty amazing,” she said. “We never would have imagined how far we have gone in such a short period of time.”

She will continue showing him and her two rough collies, Dixie and Song, and is scheduled to go to Tallmadge, Ohio, in January as well as other competitions.

“We’ve got a couple of class females who will be coming out this year to be specials,” she said. “I plan on taking them to the nationals.”