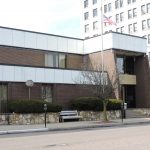 Photo by Shelley Hanson Shown here is the Bellaire municipal building, where the police department is located. Councilmen Gay Lucci and Mike Doyle say they are in favor of pay raises for all village employees but believe the police should get one first.

Councilman Gay Lucci on Friday said he wants to clarify his stance regarding potential pay raises for village employees.

Lucci said he is not against giving pay raises to all of the village’s workers. However, he believes it would be better to first give a $1 per hour pay raise to the police officers, as that department has been fiscally sound for months now.

Lucci believes after giving the police a raise, council can then look at other departments and consider giving those workers a raise as well.

Lucci said after last week’s Village Council meeting that he received some calls from people who believed he was against giving any city worker a raise. And that’s just not the truth, he said.

“I’m not against giving everyone a raise,” Lucci said. “I just wanted to give the police a raise first.”

Councilman Mike Doyle said Friday that after doing some research prior to the meeting and talking with village Treasurer Tom Sable, he came up with the idea for the $1 per hour pay raise for the police. He, too, believes the police department should be given a raise first.

“We looked at this and felt that based on their reduction in overtime and their improved performance and the stability of the account they’re paid from that it was now appropriate to give the police a raise,” Doyle said.

Doyle said he still is not in favor of transferring money from the water department to the sewer fund to cover raises for other departments. However, that does not mean he is against pay raises for all employees; he just believes it should be done differently.

In fact, Doyle said he suggested during the meeting that each council member give up a portion of their council salary to cover raises.

During this same meeting, Police Chief Richard “Dick” Flanagan said while he appreciated the idea of a pay raise for his officers, he believes all city workers should get a pay raise at one time.

No action related to pay raises was taken during the Feb. 7 meeting.