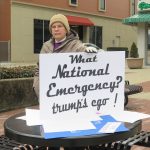 Marti Starkey of Wheeling joins other members of Marchers Ohio Valley Empowered, or MOVE, on Monday afternoon for a planned march from the Stone Center along Market Street in Wheeling to West Virginia Independence Hall. Organizers called on Congress to take action regarding President Donald Trump’s call for a national emergency to access funding to build a barrier between the United States and Mexico. Starkey and others say they believe Trump’s bypass of Congress in declaring the emergency was unnecessary and sets a bad precedent for the federal government.