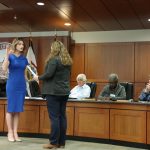 The Wheeling Human Rights Commission saw a change of face Tuesday, swearing in a new member at the first meeting run by its newly chosen chairman, Frank Calabrese.

At the meeting, the commission swore in Rosemary Ketchum as a new member of the body. Ketchum has worked for the past five years in civil rights and social justice causes in the region.

“I’m really passionate about the work of civil rights, protecting our most vulnerable community members, and I see working on this body as an extension of that,” Ketchum said. “I’m honored to be able to serve with so many incredible community members.”

Ketchum, associate director of the Marian House Drop-In Center, also serves as a member of the board of directors of the American Civil Liberties Union of West Virginia and the president of the organization’s Northern Panhandle chapter.

Ketchum was appointed to the commission by City Council earlier in February, filling a vacancy left after former chairman Steve Novotney resigned from the body in January. The commission unanimously voted to elect Calabrese as its new chairman at its meeting Jan. 15.

At the meeting, commissioners heard from Amy Gamble, executive director of the National Alliance on Mental Illness of Greater Wheeling, who spoke about her organization’s work and the importance of understanding mental health.

After hearing from Gamble, the commission unanimously approved a motion to collaborate with NAMI Wheeling and participate in mental health first aid training as a commission. Calabrese tasked Ketchum with working with Gamble to plan the collaboration.

Also at the meeting, Melissa Thompson, community development specialist, announced the commission secured six billboard ads across the city’s neighborhoods, at a cost of $3,000, to raise awareness of Fair Housing Month in April. She also said that the commission plans to have a booth at West Virginia Northern Community College’s Health and Wellness Fair on March 5.