Repairs to City-County Building in Wheeling Get Boost From State 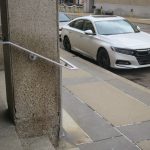 Photo by Joselyn King Granite slabs that welcome visitors to the City-County Building in Wheeling are separating from the building due to water drainage. The building has been in use since 1960.

Ohio County is getting $100,000 to make the outside of the City-County Building look better.

The West Virginia Supreme Court of Appeals announced that Ohio County is the recipient of a $100,000 grant from the State Courthouse Facilities Improvement Authority. The funding is to be used to repair stone column covers on the front and south porticos.

The building has been in use since 1960.

“The grout is peeling away, and water is getting behind it,” Ohio County Commission President Tim McCormick explained. “There is water damage, and we have to get that repaired.

McCormick doesn’t know yet what the cost will be for the work.

“The grant will help us,” he said. “When the weather breaks, we will get started. We’ll be getting some opportunities to get some more work done. It’s an older building, and we want to dress it up as much as we can.”

Similar grants received each year since 2014 have paid for a new fire alarm and sprinkler system in the courthouse, as well as the construction of a second stairwell providing emergency access from the upper floors.

New elevators also have been installed at the City-County Building.

“We’re looking at the ones we can get to first,” McCormick said. “The courtrooms are not up to speed. They definitely need to be dressed up.”

Plans call for the walls to be painted and for new benches to be placed.

County officials also may have some extra space in the building to utilize if the Wheeling Police Department moves out to a larger headquarters, but McCormick said there have been no discussions about the future of the space the police presently occupy.

“I have no idea. Nobody has ever told us anything,” McCormick said. “If they leave, we have a couple of ideas. I’m hearing rumors, but I haven’t been told anything about what will be done.”