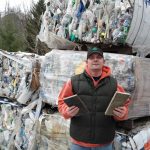 Photos by Alex Meyer Scott Ludolph, owner of recycling center Scrappy Pappy’s, holds blocks of repurposed plastic material behind bales of plastic bottles that he collected. He plans to use that repurposed plastic as a potential building material.

The center, which might look like a junkyard to some, features a large 1950s-era processing machine surrounded by bails of plastic bottles, barrels of broken glass and piles of cardboard and metal scraps.

Recently, though, Ludolph’s passion has been put to the test, amid financial strain from the job and continued rejection of his plans to improve recycling in the Friendly City.

“I’m fighting a fight with both hands behind my back,” he said. “I’ve dedicated everything I have into it.”

Ludolph he believes he has a solution: taking waste and, rather than shipping it off to be reused elsewhere, converting it locally into something useful, such as building materials. Now, he’s looking for financial backing and the right opportunity to put his plan to work.

“It’s a journey, not a sprint,” Ludolph said.

Scrappy Pappy’s began as Ludolph’s father’s business, originally only processing metals. Ludolph, 46, began working at the center in high school, and now, about 30 years later, he runs the business, processing “green materials” such as plastic and glass for the past seven years.

For several years, Scrappy Pappy’s, located at 852 McColloch St., was the only place in the area where residents could take plastic waste to be recycled, Ludolph said. He spent two years taking in materials for free, making no income from recycling, during which he took a second job at Fed-Ex.

“The support was overwhelming,” he said. “I would get 50, 60 people through my little alley a day.”

In Wheeling, the only materials that the city accepts for recycling are metal cans and paper products. Plastic and glass aren’t options.

“If the recycling program were to be expanded and started accepting more materials, the cost of the program would increase and that increase would likely have to be passed onto the rate payer,” he said.

In 2018, the city collected 11 tons of recyclables per month, compared to 1,980 tons of trash a month that were sent to landfills. That number is down from the year before, when the city recycled 19 tons per month.

Those recycled cans and paper products that the city collects are sorted at the Brooke County Solid Waste Authority and are later processed in Weirton and Toronto, Rusty Jebbia, Wheeling’s public works director, said.

Ludolph said he doesn’t see cans and paper as priorities when it comes to recycling.

“To me, recycling is trying to reprocess a material that hurts our environment,” he said. “Plastic and glass are your main issues. (Wheeling) hasn’t done that for years.”

Part of Ludolph’s efforts in recent years have involved convincing the city to contract Scrappy Pappy’s to process plastics for Wheeling.

“Scott wanted the city to pay him to process plastics. That would result in a garbage fee increase,” Thalman said. “Unfortunately, it’s just cheaper to dump some of these materials in a landfill than it is to pay a recycling processor to accept them.”

Wheeling’s recycling program currently costs $167,197 a year to operate, Jebbia said. Ludolph said he presented plans to the city, to Bethlehem and to Ohio County, all with no luck.

“I just wanted a shot and they won’t give me a shot,” he said.

In addition, Ludolph said he was forced to stop taking in plastics and glass about a year ago. The financial strain from taking in materials for free caught up to him, he said, as did China’s decision to ban imports of recyclables last year. Before that, China imported two-thirds of the world’s plastic waste, and the move disrupted the recycling market in the United States.

“We went from doing very little to lots, and I made just as much money. So we had to minimize,” Ludolph said.

Now, though, Ludolph has a new plan that he hopes will help him achieve his goal to improve recycling in Wheeling. Tucked behind the large processing equipment at Scrappy Pappy’s, he keeps buckets of shredded up plastic bottles and lids.

Using that shredded plastic, he created a process of converting it into hard blocks that he believes can be used as building materials. He hopes to use those materials to build houses or even homeless shelters.

“My whole goal is, I’m going to find a solution where it really gets recycled,” Ludolph said.

Currently, Ludolph is trying to find financial backing for his plans through private investors. Though he recently received an offer from another county to process plastics, for the time being he’s trying to stay local, he said.

“This is my hometown,” Ludolph said of Wheeling. “I’ve lived here my whole life. This is where I wanted everything to be.”

Later this month, Ludolph will hold a roundtable discussion on recycling that he hopes will drum up support for his plans. The event is set for 6 p.m. Feb. 25 at SMART Centre Market, 30 22nd St., in Wheeling.

“I’m finding my solution that will help me take all materials, but be way better and know where stuff is going,” Ludolph said. “I’m going to make it happen.”