Sons of the American Revolution Honors The Health Plan for U.S. Flag Display in Wheeling 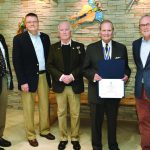 The Health Plan was honored by the Fort Henry Chapter of The Sons of the American Revolution recently for its highly visible display of the U.S. flag on the first anniversary of the business’ relocation to downtown Wheeling.

Jim Pennington, The Health Plan president and CEO, accepted a flag commendation certificate on behalf of The Health Plan from several SAR members at the downtown Wheeling headquarters during a brief recognition ceremony.

John Hargleroad, flag chairman for the local chapter of the SAR, said The Health Plan was selected by the historical organization for its highly visible display of the flag consistent with the United States Flag Code. He said it is fitting to honor The Health Plan on the first anniversary of its move from St. Clairsville to its new Wheeling corporate office between Main and Market streets.

“Before we make a selection, we keep an eye on the flag and make sure the flag is well maintained, not ripped, torn, and that it is flown at full staff and not partial staff,” Hargleroad said.

He noted it is also essential that the flag be well lit at night.

The Sons of the American Revolution recognizes area individuals, organizations, businesses and government agencies that routinely follow the United States Flag Code. The code outlines the customs and rules governing the display and use of the flag of the United States. The organization established the Flag Commendation program in 1987 and encouraged each chapter to recognize at least one entity each year.

Pennington said The Health Plan corporation is grateful to be honored by the local chapter of the Sons of the American Revolution on its one-year anniversary.

“Patriotism is extremely important across the country,” Pennington commented. He said it’s nice to have local organizations looking at things of this nature within the community and adding value to the area.

Jay Frey, president of the Fort Henry Chapter, commended The Health Plan for “demonstrating respect for this living symbol of our republic, one of the nation’s most widely recognized images, a powerful representation of America.”

Previous honorees include the city of Benwood, Oglebay, Elmhurst, the city of Wheeling, and Perkins Restaurant and Bakery.