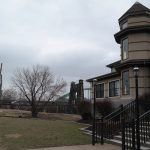 Council will hold a public hearing at its meeting at 5:30 p.m. today on a plan to temporarily lease city-owned property, the site of the planned Wheeling Island Gateway Park, for the House of Carpenter’s construction crews to use as a laydown yard. The House of the Carpenter, a Methodist ministry center located at 200 S. Front St., plans to start construction on a youth center on another property north of its current location next month.

The property to be leased, adjacent to the Wheeling Suspension Bridge, was purchased by the city in 2017 with the intention of creating a park to celebrate the bridge’s history. Last March, the city hired a firm to design the park. The city will make an announcement regarding plans for the park at the site at 2:30 p.m. Wednesday, Vice Mayor Chad Thalman said.

If the lease proposition is approved, the House of the Carpenter would use part of the city-owned property as a laydown yard for construction crews and for employee parking during construction, Executive Director Michael Linger said. The center would put down gravel for parking, which would in turn provide a base for parking at the planned city park, he said.

“It allows us to put stone down where the city needs a base, helping them get started on building a park,” Linger said.

City officials previously said the Gateway Park would help promote the suspension bridge as a tourist attraction. Built in 1849, the bridge was once the longest span of its type in the U.S.

Linger said construction on the House of the Carpenter’s youth center is set to begin March 18. The 8,500-square-foot center will include a half-court gym, meeting space and a gathering area, he said.

Also at the meeting today, council will hold a public hearing on a measure to amend and readopt city code that pertains to wireless telecommunication. If approved, city code would be updated to meet modern technology needs, such as allowing multiple service providers to use the same existing wireless tower.