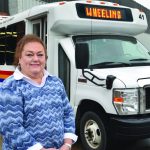 A 1980 Wheeling Central Catholic High graduate, Weishar was appointed by OVRTA/EORTA’s board of directors to fill the role of executive director last August, only a few weeks after the agency’s former executive director Tom Hvizdos retired from the position.

For more than three decades, Weishar said she has thoroughly enjoyed working for the public transportation agency, located at 21 S. Huron St. on Wheeling Island. Ohio Valley and Eastern Ohio Regional Transit Authority is the provider of public transportation located in Wheeling and the surrounding communities. The company is split into two divisions, the OVRTA, which provides seven routes on the West Virginia side of metro area, and the EORTA, which features fourroutes for the Ohio communities.

After being hired as the the agency’s office manager in 1986, Weishar was quickly promoted to finance director where she served in that role for 32 years before being appointed to the executive director position last summer.

“I love this place. I’ve been here for 33 years. It’s been like home to me,” Weishar explained.

Now that she is dealing with the day to day operations of the agency, Weishar said she hopes to bring a few improvements to OVRTA/EORTA over the next several years; including possibly adding electronic fare boxes and bringing a new exterior design to their fleet of buses and vans.

“Not in the near future, but within five years we would like to see electronic fare boxes and people being able to pay on a bus using a debit card as opposed to just cash,” Weishar explained. She hopes to move the agency in a more technologically advanced direction as electronic fare boxes are commonly used in larger cities around the country.

According to U.S. Department of Transportation website, fare collection systems that use electronic tickets or passes can reduce passenger boarding times by 13 percent compared to driver operated systems that require exact change.

In addition, Weishar said OVRTA/EORTA’s board members would like to see a better exterior design to the buses. She said they currently have more of a “plain” appearance.

With the West Virginia Division of Highways I-70 Bridges Project scheduled to begin this fall, Weishar plans to stay in close contact with local DOH officials to work out any bus route and schedule conflicts the project may pose for OVRTA/EORTA over the next few years. With a project that is expected to include the rehabilitation of 25 bridges and total replacement of one bridge in Ohio County between the Ohio State line and Middle Creek — Weishar said there will be detours that will certainly affect some of the agency’s bus routes and schedules.

“Our buses are going to have to adjust to this. So we want to see how long they are going to close it (I-70), and where they are closing it. It’s going to affect us,” she said, while attending a recent public DOH meeting in Wheeling.