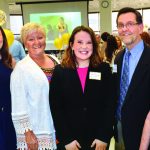 To celebrate the 40th consecutive win for the Wheeling Park High School’s Speech and Debate Team, all past members were invited to a reunion celebration at the high school Saturday evening. Since 1980, the WPHS team has won the state tournament hosted each year by the West Virginia Speech and Debate Association, previously known as the West Virginia Interscholastic Forensic League. Past members, coaches, and judges were invited to join the current team in celebrating all 40 victories. Pictured, from left, are Gail Adams, former assistant coach and reunion chairperson, Co-organizer Allison O’Konski, Linda Warble-Schultz, who was on the 1983 and 1984 speech teams, Wheeling Park Senior Faith Richter, who was on this year’s winning team, and current Coach Bill Cornforth, former Coach Fran Schoolcraft.