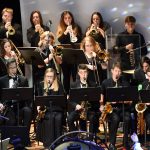 WHEELING — The Wheeling Park High School Band stepped it up and marched to a successful season this year, though director David Alfred still limps alongside them following a series of serious injuries over the past two school years.

Alfred was the victim in three separate automobile accidents over a 13-month period. The first happened in September 2017, and resulted in a critical concussion that sidelined him for eight months. The next occurred last July, and the third one in October. The last crash resulted in injuries that nearly led to him losing his left foot.

During his absences, Alfred said “colleagues came together to make sure the program survived.”

And he also credits his students for continuing to march on without him.

“When they didn’t have teacher, they still found a way to do the best they can,” Alfred said. “They kept going, and found ways to carry on.”

The band’s first success this school year wasn’t even music related, but is one attributed to their classroom abilities.

The concert band also continues to receive “superior” ratings for its live musical performances from the West Virginia Music Educators Association — just as it has for the past 36 consecutive years. Six band members also were nominated to perform with the All State Band at the MEA’s In Service Conference this spring.

To cap off its year, the WPHS jazz ensemble took top prize at the West Virginia Jazz Festival for the first time. Many of the band members were selected to the MEA Honor Jazz Band, with some members also being members of the MEA Honor Choir.

“Groups I’ve led have been nominated, but none had ever made it,” Alfred said. “I was pleasantly surprised.”

Alfred said he is pleased with the band’s awards, but in the end “it’s about the journey” and learning by the students.

His own journey has been curtailed by the automobile accidents.

He was driving his prized Mustang when the first occurred in September 2017. The head injuries he suffered in the crash meant he couldn’t work with the band members for months.

“I couldn’t remember people’s names,” Alfred said. “I would sit in the audience, and wonder if I would ever make it back.”

He took gradual steps to recovery at the UPMC Rooney Concussion Center in Pittsburgh, and reintegrated himself back into the classroom — starting at just one hour per day, then increasing the time.

Alfred wasn’t back full-time until near the end of the 2018 school year.

Shortly after that July, his car got broad-sided in the second accident while driving with his wife, Tami. The couple ended up needing a ride home from the hospital that night.

“We were out of cars. I called a former student to come pick us up,” he said. “The car was out six weeks for repairs, and I had it back for two weeks when the third accident occurred.”

That was the accident that severely damaged his left foot. Tami was driving when the head-on collision occurred.

When he returned to the classroom later in the fall, he used a walker, scooter and cane to get around.

“It isn’t easy, but I do just what everybody else does,” he said. “I take it one step at a time, and I make it work.

“This year at the Festival of Sound, they waited until I got to the stage. Then I handed away my cane, and I did my thing.”

Just before the third accident, Alfred bought himself another classic Mustang — which he still has yet to drive. The pain in his foot hasn’t permitted him to operate a manual transmission.

“I hope it will better by this summer and I can take it out,” he said of the Mustang.

While he drives to work each day, Alfred said he still doesn’t drive to unfamiliar places unless somebody is with him.

“When you’ve seen your life flash before your eyes twice, you decide to get on with living. You get on to doing what you need to do,” he said. “When things happen so quickly, you get a different perspective.”