Athletes Inspired By Superheroes Sweat It Out 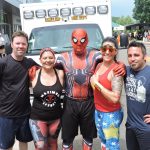 For many participants in the Tough as Nails Urban Challenge, common attire included a moisture-wicking shirt and a headband, quite possibly with an American flag design on it. For one group of runners, their choice in attire was a little more inspired.

Around 30 minutes before the first heat began at noon, Trent Kalcum-Snyder was beginning to regret his life choices, though you wouldn’t know it from the look on his face.

Kalcum-Snyder walked up in athletic shorts, comfortable shoes and a full-body Spider-Man bodysuit, including the face-covering mask.

Rolling the mask up over his mouth, the rock wall-crawler was hesitant to begin, but still ready to tackle the challenge.

“They said, ‘We’re dressing up as superheroes, and, well, Spider-Man was mine, and now I’m hating my decisions,” Kalcum-Snyder lamented. “It’s horrible in this thing.”

“I live in Arizona, and my family, who’s from here — my sister decided to run this race months ago, so we’ve been planning as a family for months to run it,” said Contreras. “You can’t just run a race, you have to stand out.”

“I’m the one who started the process, and this was on my bucket list,” Beveridge said. “I didn’t really give it a thought until I showed up this morning and they were in that.”

Joining the group was I.J. Kalcum, representing his favorite hero — “Joy of Painting” host Bob Ross — on a T-shirt, and Matt Grampa in plain clothes. Many members of the group, Beveridge said, were veteran runners, but she was a rookie. However, she said she felt ready to go Sunday morning after a few weeks of training.