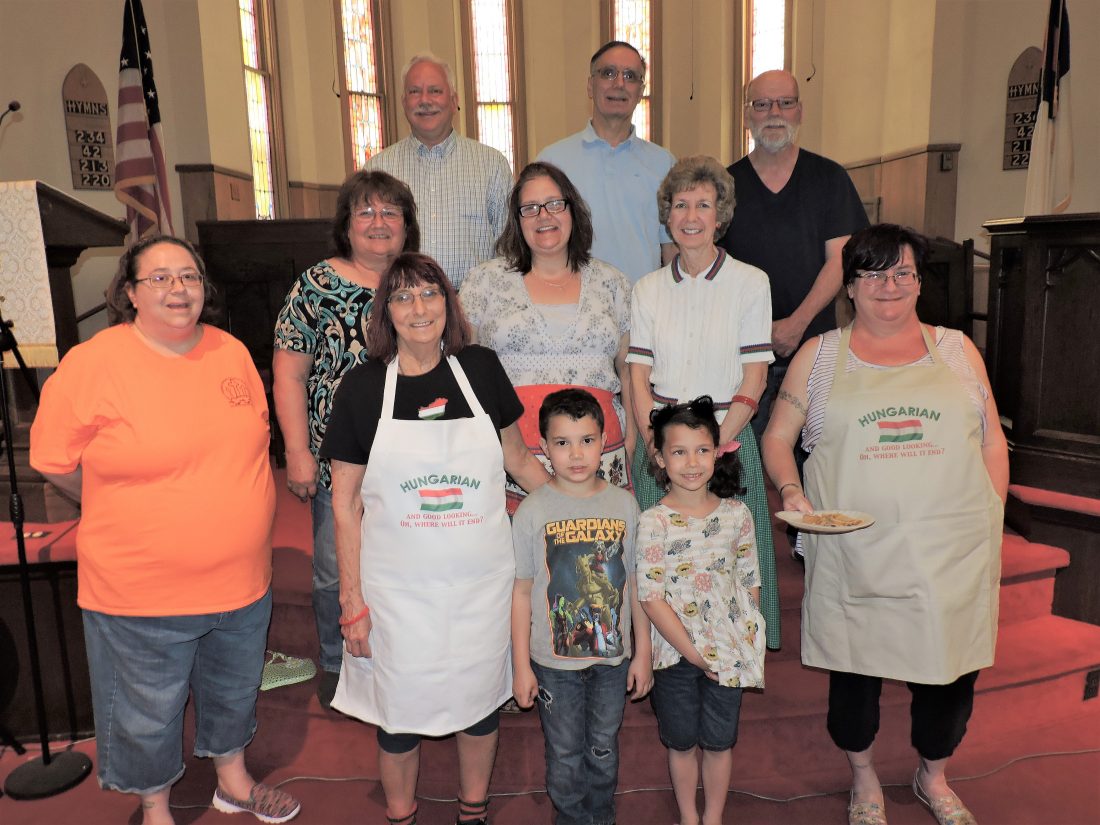 Photo by Shelley Hanson Preparing for their first Hungarian Festival are members of the First Presbyterian Church, Martins Ferry. At front is Silas Vickers, 8, and Zoe Vickers, 6. Second row are Christina Duff, Barbara Konyha-Morris and Beth Vickers. Third row, from left, Angie Laase, Pamala Chieffalo and Bonnie Cook. And back row, from left, are Martins Ferry Mayor Robert Krajnyak, the Rev. David Stammerjohn and Ron Yuterzuber. Two other cooks not shown include Andy and Susan Sutak.

Many Ohio Valley residents likely grew up eating foods with Hungarian roots — such as cabbage rolls and goulash — without even knowing it.

In Martins Ferry, members of the First Presbyterian Church, 400 Walnut St., aim to celebrate these foods and their Hungarian heritage during their first Hungarian Festival, set for Saturday.

Church member Ron Yuterzuber said he started seriously contemplating the idea for the festival after someone mentioned it casually one day.

That idea snowballed into a full-blown menu of main dishes, side dishes and desserts, which will be served buffet-style inside the church between noon and 4 p.m. To complement the festival, a variety of vendors will be set up outside on the street beside the church from 11 a.m. to 4 p.m.

All the food will be prepared by church members, many of whom have Hungarian roots. Dishes will include cabbage rolls, Hungarian-style sausage and goulash. Side dishes will include mashed potatoes, cabbage and noodles, and cucumber salad.

Homemade desserts will include Hungarian nut rolls, kiflis, snowballs, poppy seed rolls and palascinta, which is like a crepe.

Church member Pamala Chieffalo said Martins Ferry Mayor Robert Krajnyak and his father, Robert Krajnyak, and the Rev. David Stammerjohn, pastor of the church, will conduct the ribbon-cutting ceremony for the festival at noon that day.

“They are our honored Hungarian-American guests,” he said of Krajnyak and his father.

Stammerjohn said the church members have been doing a great job organizing the festival and he is looking forward to it.

During warm weather months the church often conducts cookouts on the street, inviting all to enjoy a hamburger, hotdog and the picnic food for any donation. The lunch-time events have become quite popular for not only residents, but workers taking a break from their jobs in the city. The lunches often include live music or a DJ.

“Two hundred cabbage rolls sold out in an hour and a half,” she said.