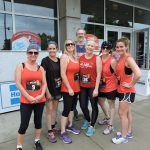 A group of friends who call themselves the “Hell Cats” were ready to compete in the new Tough as Nails Urban Challenge on Sunday.

The “Hell Cats” have been competing as a team in an array of obstacle courses for the past seven years. The group participated in their first mud-run in 2012, they said.

In excitement for Sunday’s event the group of athletes were among the first arrivals to register to participate in the obstacle course.

Originally, the group consisted of all women, including Margaret Tucker, Becky Stoffel, Dawnell McLendon, Melinda Koslik, Carrie Kreitzer and Amanda Dolan; however, they recently adopted a new member of the team.

Dave Stoffel became an honorary member of the group on Sunday for the event, the women said.

The group of now seven, who are all from the Wheeling area, sported orange tops to show their unity and camaraderie. They were all ecstatic for the new challenge and thrilled that it was to take place in Wheeling.

“We’re really happy (about) this, it’s literally in our backyard,” Kreitzer said about the new challenge.

Kreitzer jokingly added that she would like to see the obstacles to remain in place following the challenge so the team could continue to run the course.

“We would like to petition that some of the obstacles stay so we can train on them all year round,” Kreitzer said, to the rest of the team’s agreement.