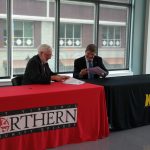 Leaders of both West Virginia Northern Community College and West Liberty University signed an agreement that will make degree completion easier for students who transferred from Northern to WLU.

“Students oftentimes drop in and out of education. Sometimes they’ll transfer before they have an associate degree, and they might drop out before they get a bachelor’s degree as well,” Koon said. “This provides another opportunity for students to earn a degree, making them more employable.”

The reverse transfer agreement will start as a pilot program in the upcoming fall semester. The pilot program will allow both institutions to assess the procedures before adding additional majors, according to a press release.

Greiner thanked academic administrators at both schools for spending “countless hours” on preparing the agreement.

“It enables (students) to do remarkable things and hopefully stay in the area and become productive citizens,” Greiner said. “This is so exciting to be able to do this. We’re really glad to have this opportunity.”

Koon spoke of the value of completing an associate degree, noting that people with such a degree earn about $4,600 to $7,200 more per year than those with no degree.

“What we’re doing is creating more opportunities for students to earn degrees in the Northern Panhandle,” he said. “It’s another example of the fine cooperative agreements we’ve had with West Liberty over the years to try to increase the college going rate.”

The program will also support West Virginia’s Climb, a state campaign to equip 60 percent of West Virginians with a certificate or degree by 2030, according to the release.

“We are pleased to work with students who earned credits at West Virginia Northern and wish to attain an associate degree as they push on toward their bachelor’s degree,” Greiner said.