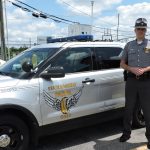 Following James Faunda’s promotion to staff lieutenant at the Cambridge Post, Maurice Waddell was promoted to lieutenant and took over as commander of the Ohio State Highway Patrol’s St. Clairsville Post.

Waddell, a Cambridge, Ohio, native, began his patrol career in St. Clairsville more than 20 years ago. He began serving in 1998 as a dispatcher before going to the Highway Patrol Academy in 2000 to be trained as a trooper.

“It’s all come full circle,” he said regarding his move back to St. Clairsville in late April.

Prior to his current position, the lieutenant served as a state trooper in Athens and Cambridge. In February 2014, Waddell was promoted to sergeant of the Cambridge Post.

He said there hasn’t been a whole lot of change in the St. Clairsville Post since he was a dispatcher in 1998.

“There has been a little bit of change inside the building, but there has been change as far a personnel goes. People retire, transfer and get promoted,” he said.

There are currently four troopers and sergeants remaining there that Waddell worked with during his prior service in St. Clairsville. The post currently has 12 troopers and four sergeants.

Waddell is enjoying his recent promotion.

He noted that the change was made a little easier because of his familiarity with the area and some of the people who work at the post. The biggest challenge Waddell said he is facing is that the post is experiencing more fatal crashes in 2019 compared to past years.

“That’s something I have to figure out, what we can do to stop that trend. I think now with both counties, Monroe and Belmont, we are at eight fatalities already, which is significantly higher than the past years,” he said.

The challenge will be to identify cause of this trend and then allocate OSHP resources to those areas to try and prevent further fatalities, he added.

Memorial Day weekend was busy with traffic this year traffic but resulted in no serious accidents, Waddell said. In the Belmont and Monroe county area, there were only 18 crashes during the holiday weekend with no fatalities and no serious injuries.

“Statewide, fatal crashes were down from the previous year. … There were no fatalities in our post or even in our district (during Memorial Day weekend). There are six posts in our district,” he said.

The newest initiative of the OSHP is the “100 Deadliest Days of Summer,” referring to the time period from Memorial Day weekend through Labor Day weekend. The OSHP is reminding motorists to drive buckled, focused and sober. During these summer months, the increase in the volume of traffic brings with it an increase in vehicular crashes and fatalities.

“The big thing this is pushing is public awareness. It’s a problem. We get into summer time, just like the initiative states, a third of our fatalities in the state are counted during this time frame,” he said.

According to the initiative, last year 336 fatal crashes killed 360 people during the period.

These 100 days only represent 28 percent of the calendar year, but they account for more than one third of all fatal traffic crashes and deaths. Operating a vehicle while impaired and speeding significantly contributed to these crashes, a release from the patrol states.

In fact, 37 percent of all fatal crashes were OVI-related and 28 percent were speed related.

“Drivers should make responsible choices behind the wheel every day of the year, but this is especially important during these dangerous summer months,” Gov. Mike DeWine said. “Protect yourself and others on the road by committing to safe driving habits.”

Waddell said that resident safety is the patrol’s main concern.