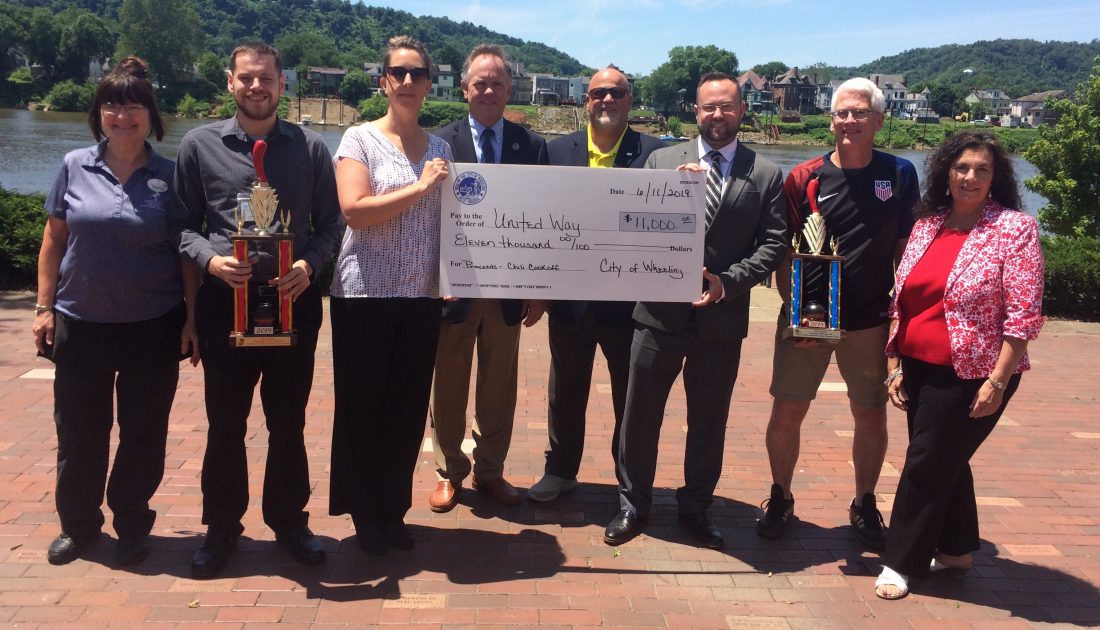 The 18th annual Wheeling Feeling Chili Cookoff on June 1 produced great chili and a total of $11,000 for the United Way of the Upper Ohio Valley.

Wheeling officials and cook-off Chairperson Rosemary Humway-Warmuth presented the fundraising check on the city’s behalf to Melynda Sampson, associate director of the United Way of the Upper Ohio Valley on Tuesday, and were joined by some of the local cooks who competed in the event.

A total of 36 individual cooks competed in the annual cook-off, along with a dozen restaurants and commercial chili entries. The top winners in the ICS competition categories – traditional red, veggie, homestyle and a new youth division – are eligible to compete in the World’s Championship Chili Cookoff in September in Des Moines, Iowa, and in the World Food Championships.

“I feel safe in saying that the quality of the Wheeling Feeling Chili Cookoff is of the finest in the country,” Humway-Warmuth said. “In fact, the current winner of the World Championship cooked and judged at this year’s event. The continued success of the Wheeling Feeling Chili Cookoff is due to the commitment of the City of Wheeling, the employees, volunteers and chili cooks and teams who make chili and serve it with a smile.”

More than $5,000 in prizes was distributed based on the judges’ rankings.

“This partnership with the City of Wheeling has dual value,” said Jessica Rine, United Way executive director. “Underneath this fun event that brings the community together and kicks off summer in the Ohio Valley, is a needed donation to help fight some of the biggest issues our community is facing.”

The judging tent housed more than 50 local judges throughout the day, under the leadership of Brian Warmuth, the “Head Chili”of the contest. Warmuth has competed at chili cook-off events throughout the country for more than 25 years and was instrumental in founding the Wheeling Feeling Chili Cookoff.

Based on final scores tabulated by head scorekeeper Nancy Hughes of Kozicki Hughes Tickerhoof, PLLC, the winners in the 2019 Wheeling Feeling Chili Cookoff are as follows: