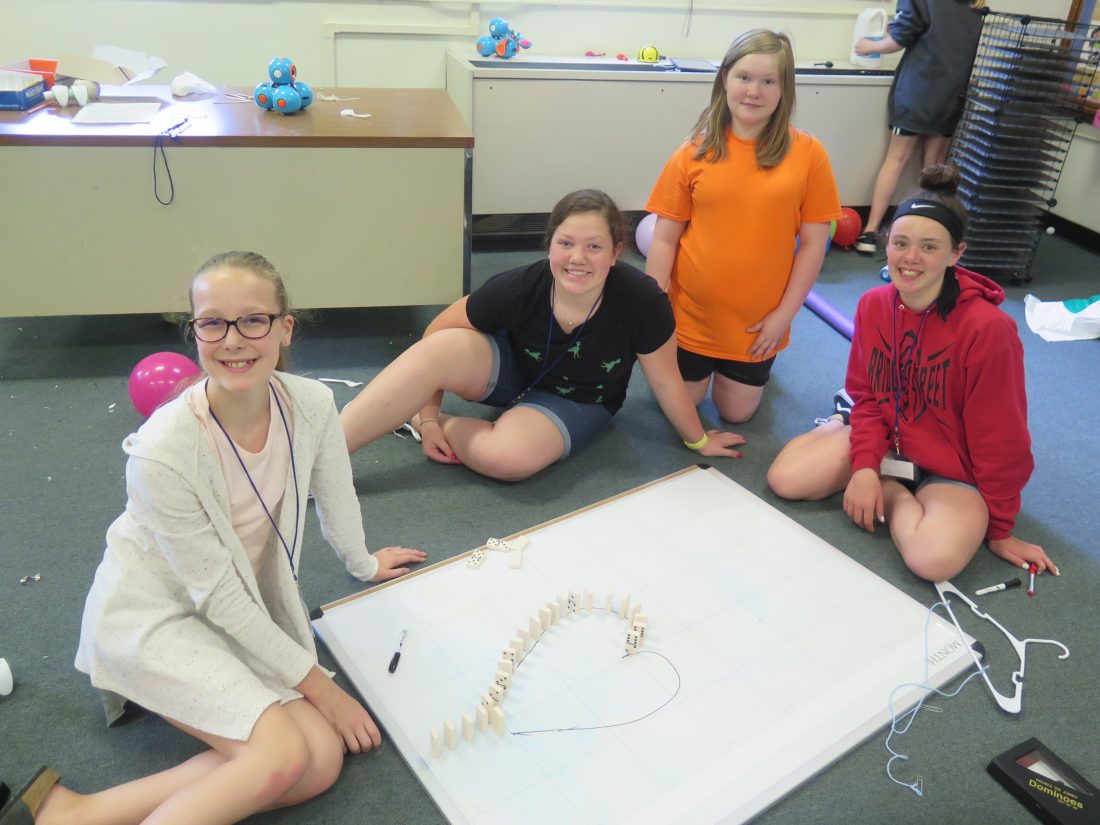 WHEELING — Some discarded cardboard, duct tape, and wooden pieces paired with ingenuity could be creating the next generation of engineers this summer in Ohio County.

Students are applying their thought processes to science, technology, engineering, art and math challenges during STEAM Camp happening through June 21 at the Warwood School.

This past week saw 67 high school and middle school students attend the camp, while 115 elementary school students are expected to take part this coming week, according to JoJo Shay, innovation coordinator for Ohio County Schools.

The students are participating in learning challenges suggested by the West Virginia Department of Education.

Monday saw them build bridges out of wooden sticks meant to support as many full 16-ounce bottles of drinking water as possible. Shay reported the bridge supporting the most weight held 14 water bottles.

On Tuesday, the students built boats using only discarded cardboard boxes and duct tape. The object was to make the boats float while holding rolls of wrapped pennies, and one of the boats contained $19 worth of pennies, along with one 16-ounce bottle of water, Shay said.

Wednesday had them attempting to craft ways to drop an egg without it breaking.

Through the week, the children worked on building their Rube Goldberg machines — a contraption intentionally designed to perform a simple task in an indirect and overcomplicated fashion.

The youths are encouraged to think through their challenges to find a successful solution.

“We tell them there is not a cookie-cutter answer,” Shay said. “Sometimes school work constrains them, and this is about open-ended thinking without time constraints. It’s amazing to see what teenagers can do.”

Aidan Scott, an incoming eighth-grader at Triadelphia Middle School, said he always had an interest in engineering and building things. This week, his idea for a Rube Goldberg machine involved a small robot catapulting a marble at dominos stacked to fall when hit.

“When I heard they would be building things here, I thought this would be fun,” he said of STEAM camp.

He said he likes to build “anything I can come up with,” and sees himself someday being in the construction business and building houses.

But not all the students in the camp want to pursue science and technology-related careers.

Arie Friend, an incoming seventh grade student at the Warwood School, sees herself as a music teacher someday. She also believes music and creativity are necessary to

“Music is helpful with engineering,” she said. “It’s about creativity, and sometimes you have to make up things as you go.”

She learned this week using the duct tape to tape up the edges of the cardboard box helps it to float better, and that it also helps to choose a strong box to start as it becomes saturated with water less quickly.

“There are a lot of things that kids could do this summer, and 70 of them want to come build something here.

“That’s amazing,” Shay said. “To watch them engage is rewarding, and I’m amazed by the ideas they have.”