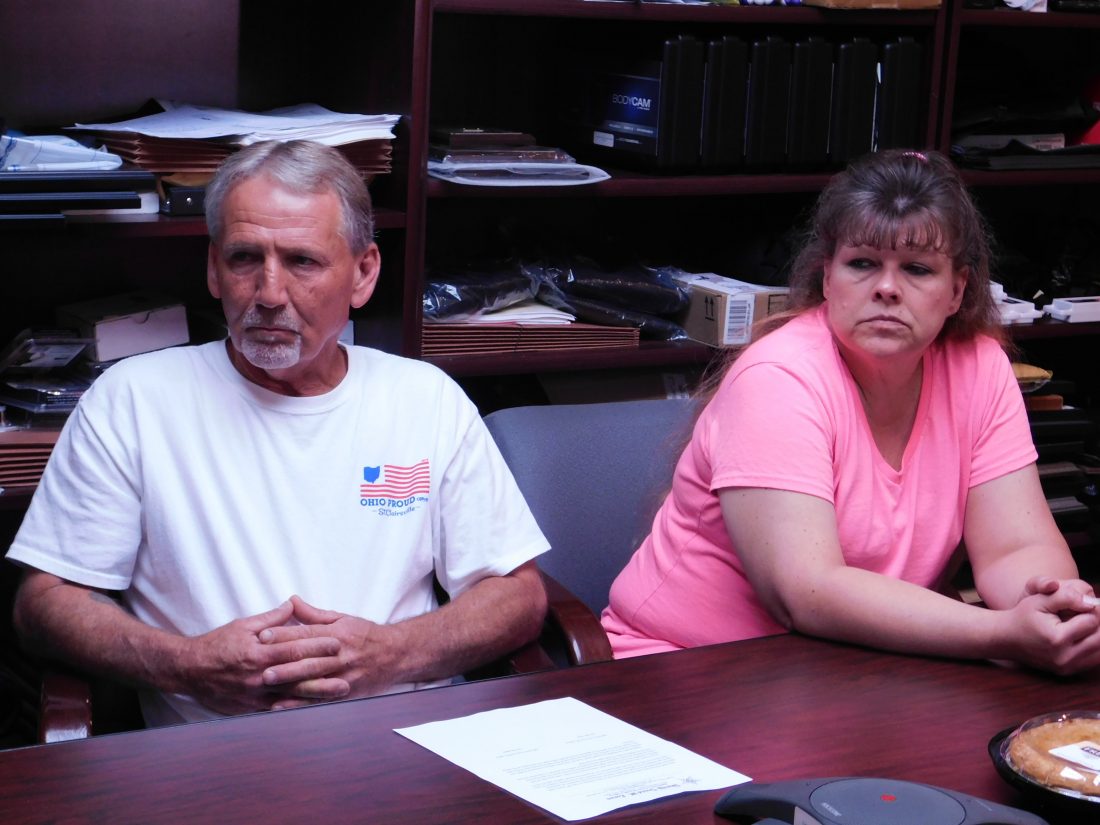 One year to the day that a Martins Ferry couple went missing, the Belmont and Jefferson County sheriffs’ office have announced a joint reward for any information that leads to the pair’s discovery.

They were driving Goff’s light blue 1990 Oldsmobile Delta 88. The four-door vehicle has an Ohio license plate number of EYA 7482.

Belmont County Sheriff David Lucas said his and Jefferson County Sheriff Fred Abdalla’s departments have been cooperating on the case and announced the $5,000 reward during a news conference Monday.

“His personnel and our personnel have been working closely together for the last year and put a lot of time and man-hours in,” Lucas said, adding that they have been joined by the Ohio State Highway Patrol, the Ohio Bureau of Criminal Investigation, and the FBI.

“We wanted to offer a reward for information,” he said. “Sheriff Abdalla and I wanted to put something out there…as an incentive for information to locate these individuals. It’s been a year. We’re not stopping. We’re not giving up. We want to put this out there to the community of both counties. If anybody has information, please call us. Give us the information. Let us follow it to see if it pans out.”

He added that friends and loved ones may also contribute to the reward.

Detective Sgt. Randy Stewart elaborated on the search process. He said this has been one of the longer cases he has worked on.

“We have been centralizing the search in Jefferson County. Some items in the investigation leads us to Jefferson County,” he said. “We have done a lot of work. We have executed search warrants, we have collected evidence. It’s been a very strong, ongoing case, and we’re not going to quit.”

Stewart said the FBI is no longer in the area, but law enforcement remains in contact with them.

Since their disappearance, plans have been flown over miles of both Belmont and Jefferson Counties and law enforcement has conducted dozens of interviews. Cadaver dogs have also been employed, and divers have search bodies of water for remains.

“We’re here for the family,” Lucas said. “We still want to hope for the best, but we’ve got to be open-minded about it too. But we need to find them and we need to put the family at rest with regards to them missing.”

Lucas did not elaborate if there were any suspects in the case.

“(The case) is under investigation and will continue on. Our investigators, Sheriff Abdalla’s investigators, the FBI,” Lucas said, adding that more information will be given when the it is available and confirmed.

“It’s like living the same day over and over again. It just never goes away, and if it goes away from your mind for a little bit, there’s something that pops up to remind you. It’s tough.”

She added that Joni Davis was taking anti-seizure medication twice a day.

“A whole year without medication? It’s not good,” she said.

Jackie Davis thanked the sheriffs, their investigators and other law enforcement agencies.

“I just hope somebody will come forward with something that’s concrete,” she said. “I can’t let it go.”