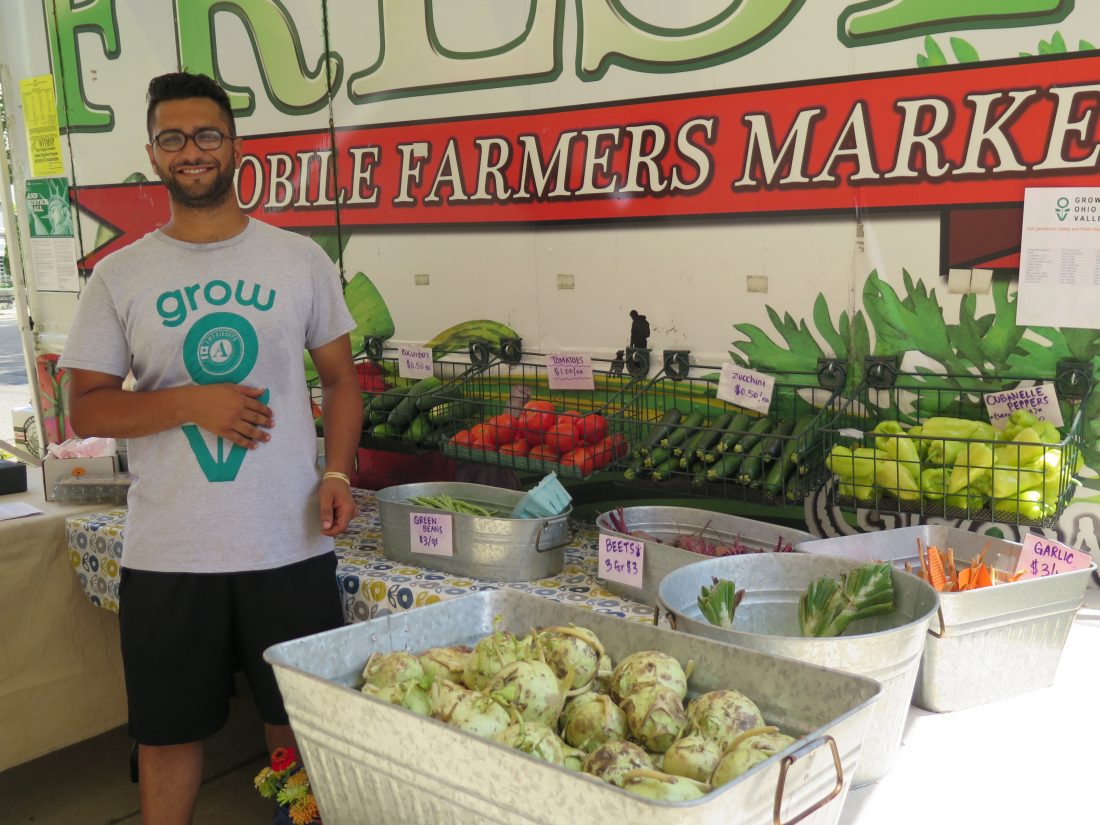 Mehdi Avari, with Grow Ohio Valley through Americorps, helps out during a farmer’s market Wednesday in East Wheeling.

Grow Ohio Valley is sowing plans for its future public market store, and it hopes to reap an opening by the end of this year.

Grow OV takes its mobile produce market to Wheeling neighborhoods throughout the summer, and has been pushing in recent years to open a permanent public market at the Robert C. Byrd Intermodal Transportation Center in downtown Wheeling. Approval for a lease was needed not just from the city of Wheeling — which owns the parking garage, but also from the the Anthony Wayne Corporation — which operates the garage, the Federal Transit Administration and the Ohio Valley Regional Transportation Authority.

Grow OV was able to sign its lease in May, but construction to transform the unused area along the Main Street side of the garage has yet to begin. Mostly what is needed is electrical work, according to Swan.

“We’re finalizing the architectural drawings,” he said. “Once those are finalized, we will be getting contractors in and will get a good sense of the timeline.”

Presently, Grow OV is in the thick of its farming season, Swan said. The group does “no till” farming and grows vegetables at greenhouse on 14th Street in East Wheeling, and at its Lincoln Meadow farm overlooking downtown Wheeling, as well as on plots of land in East Wheeling where members instruct youths on the values of farming.

“All over the city, we’re having education programs with kids all the time,” Swan said.

One of the programs takes places at Laughlin Chapel, where Grow OV members teach kids how to cook and garden. Another project in which Grow OV is involved is “Project Worm,” which teams Grow OV staff with clients at Northwood Health Systems to do composting.

All the while, Grove OV also continues to harvest apples from its urban apple orchard on Vineyard Hill.

The group’s main objective continues to be to bring good, healthy food to the masses, and find new markets for farmers.

“We help farmers find new sales channels for their markets,” Swan said. “We find food hubs, and new markets for food. We also want to create places for those who live downtown to find good food.”

Children coming to the market are given a token good for $2 in produce there.