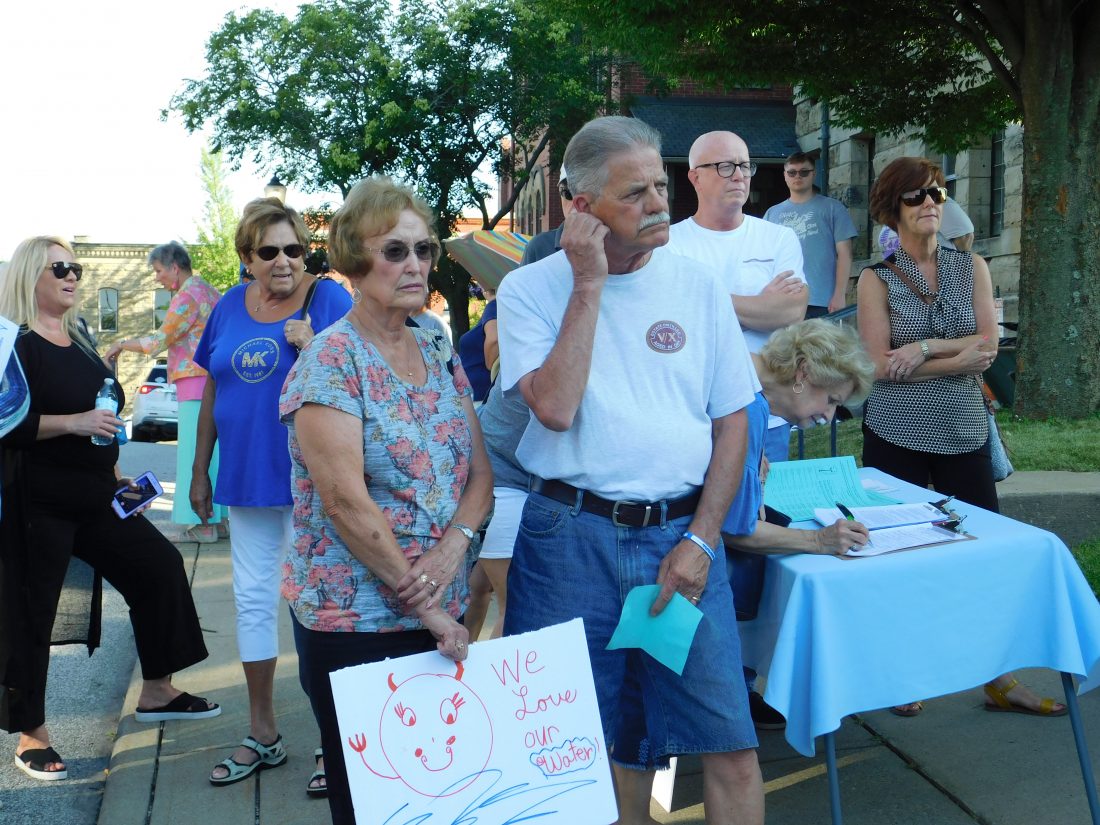 St. Clairsville Mayor Terry Pugh was among the city leaders who spoke briefly at a rally prior to Monday’s meeting. Two dozen area residents gathered outside the city building to express concerns about the future of the city’s water and wastewater. Pugh said he was available to provide more information. Other leaders included Council President Tim Porter, left, and Council Members Perry Basile, Mike Smith and Beth Oprisch.

About two dozen St. Clairsville and area residents rallied outside the city building to voice concerns and objections to the potential privatization of the city’s aging water and wastewater systems.

The city leaders have been considering a bid from Aqua Ohio, a private entity, and the council will begin discussing the bid Thursday.

Kathryn Thalman, who served on an advisory committee formed to evaluate the bid from Aqua Ohio, which was disbanded in late June after several meetings marked by character attacks, suggested another public meeting was in order now that there was greater interest.

“I am not saying it is the wrong thing, I just want to know that everything is transparent and on the table,” Thalman said.

She said while water privatization might be the correct decision, she and many residents had unanswered questions.

Mayor Terry Pugh spoke briefly, since he had to attend a committee meeting prior to the council meeting, but said his door was open to residents who had questions about the water and wastewater system, and the options being considered. He added that Bill Brooks, a vocal opponent of privatization, has been provided with information at his request.

At the rally, Councilwoman Beth Oprisch was able to stay and answer further questions. Councilmen Perry Basile, Jim Velas, Mike Smith and Council President Tim Porter spoke briefly before having to attend the committee meeting. Smith said he agreed with Brooks’ assertion that the city should have an independent consultant review the water system and present options.

“Right now I think we should probably, in my opinion, start the process over, because the public trust right now in council and the administration is at an all-time low,” Smith said.

Velas, Basile and Porter said it would be necessary to consider all options.

Many residents commented during the rally.

“After all these years of St. Clairsville having water issues, why now? Why right before the election is this such a big push?” Derek Diehl of St. Clairsville said, speculating that city leaders might stand to gain from such a sale. He also thinks going on Belmont County’s water system might be the best option.

Several said water rates would certainly increase no matter what decision is made, but the water would still belong to the city.

“I just think all options have to be considered. This problem’s been going on for years and years. It’s not an overnight solution,” Ed Sinoski of St. Clairsville said. “Not all of them are going to be popular, but let’s find out what they all are and take the least undesirable of the bunch.”

More than 20 people attended the council meeting. Brooks presented a letter he had received from Law Director Richard Myser on behalf of the city, requesting that Brooks not attempt to contact city employees or interfere with them while working, or come onto city property during regular working hours. Afterward, Pugh said Brooks had recently entered the water plant to apparently speak with employees and gather information. Pugh said due to liability issues, it was necessary to arrange an appointment with city leaders.

“We didn’t know he was there. If he got hurt, guess who’d be suing the city?” Pugh said.

Thalman also spoke to the council, saying she had looked into bidding process. She has objected to Aqua Ohio’s being the only bid received and added that she believed Aqua Ohio might have had an unfair advantage, having had more than a year to familiarize itself with St. Clairsville. She said she did not know if other options or funding opportunities might be available.

Pugh pointed out that Aqua Ohio had been the first to show interest, and had been following the city’s water situation for some time.

“They’ve been working with us and querying us for almost two years. We know our problem wasn’t getting any better,” Pugh said.

The matter will be further discussed in council at 7:30 p.m. Thursday at the city building. An executive session will likely occur for the purpose of discussing the bid, and possibly other matters of litigation. Pugh noted that the city had secured an attorney specializing in utility acquisition, who would consult council via conference call.

Pugh added that the council would not consider a decision to sell until at least September. He noted it appeared the council could be divided on the vote.

“They each have a vote,” Pugh said. “I hope everybody is concerned with the best for the citizens.”

A full council was present at the meeting, including Linda Jordan, Frank Sabatino, and J. Mark Bukmir.