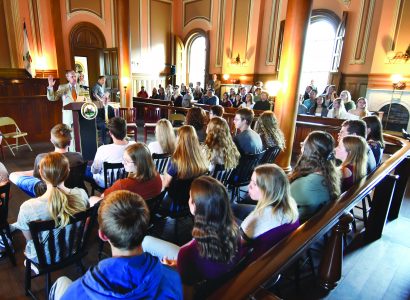 More than 200 high school students from five Northern Panhandle counties were treated to a civics lesson at West Virginia Independence Hall in downtown Wheeling on Monday as part of an annual event held in conjunction with U.S. Constitution Day, which is being celebrated around the nation today.

Ihlenfeld said the event was a perfect opportunity for the state to strengthen civic leadership and knowledge while helping area youth better understand the state history, civics and the importance of the U.S. Constitution.

“Today is a good opportunity for me to talk about my small role in state government and how the Legislature plays a role in setting policy in West Virginia. So I’m excited to be here and talk to the students,” Ihlenfeld said.

Joey Wiseman, with the Department of Education, said the event is part of celebrating Constitution Day with students in the Northern Panhandle and educating them on both the U.S. and state constitutions.

He said it has become an annual event. Each student received a small gift bag which included a U.S. flag and a pocket U.S. Constitution. They also were treated to lunch at River City Restaurant in downtown following their tour of the hall.

Constitution Day commemorates the formation and signing of the U.S. Constitution by our Founding Fathers on Sept. 17 in 1787, and established the framework of our government and the rights and freedoms that U.S. citizens enjoy today.