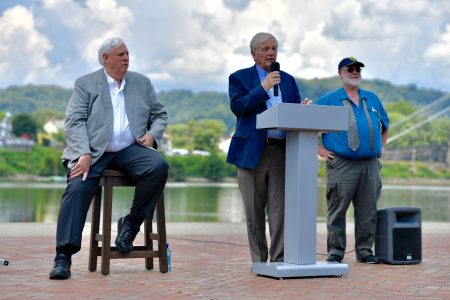 Byrd White, center, secretary of the Department of Transportation, speaks at an announcement in Wheeling with Gov. Jim Justice, left, and Deputy Commissioner of Highways Jimmy Wriston, right.

CHARLESTON — As the West Virginia Senate gears up to approve Gov. Jim Justice’s appointments and wrap up its portion of the special session called seven months ago, one of Justice’s primary challengers is calling on senators to give a thumbs down to the new head of roads.

Engineer and businessman Woody Thrasher, the former secretary of the Department of Commerce under Justice and a Democrat-turned-Republican challenger to Justice in the May 2020 primary, is calling on the Senate Confirmations Committee to reject the appointment of Byrd White as secretary of the Department of Transportation and Commissioner of Highways.

“Mr. White, while a fine gentleman, lacks the basic qualifications to lead the Department of Transportation,” Thrasher said. “These positions require experience in highway planning, finance, construction, maintenance, management and supervision. He was not hired for his transportation experience. He was given two critical jobs and a hefty salary just because he’s a friend of Jim.

The Senate will gavel back into special session at 9 a.m. Monday. The Senate Confirmations Committee will meet afterward at 9:30 a.m. to consider the appointments requested by the governor.

The West Virginia Constitution gives the Senate the power to advise and consent to certain appointments made by the governor.

Justice, on March 13, announced the appointment of Byrd White as secretary of the Department of Transportation to replace Tom Smith. Justice fired Smith on March 10.

According to state code, the commissioner of highways “shall be a person who is experienced in highway planning, finance, construction, maintenance, management and supervision qualifying him for the duties of his office.”

White has an associate’s degree in engineering from West Virginia Institute of Technology and a bachelor’s in business from Christopher Newport College. He also is a Certified Public Accountant.

State code also requires the commissioner of highways to live in Charleston, the state capital. White, who resigned from the Raleigh County Commission to take the transportation job, lives in Beaver.

“The appointment shows this administration’s lack of understanding about our dire road issues or how to fix them,” Thrasher said. “The citizens have spoken: they are sick of knee-jerk responses to real issues. West Virginians want solutions, not stunts.”

According to the MetroNews West Virginia Poll, there was a 75 percent net dissatisfaction with road conditions in the communities of respondents, with 33 percent feeling somewhat dissatisfied and 42 percent feeling very dissatisfied. Of those polled, 37 percent said very little has been done on secondary roads, while 32 percent said nothing has been done on their secondary roads.

“Three out of four folks see our road repairs as a failure,” Thrasher said. “As a professional engineer, I am dismayed by the haphazard process being used to address our dilapidated highways system. The current response appears to be nothing more than panicked, short-term pothole repairs that will fail with the first freeze.”

Justice, who spent the first two years of his term focused on major road construction projects and passing the Roads to Prosperity bonds, switched his focused to secondary road maintenance in March, bringing Transportation Department managers to Charleston and ordering them to compile lists of the top-priority maintenance projects in their counties and districts.

Since March, the state has completed more than 9,643 miles of ditching, patching, and stabilization projects on secondary roads at more than 4,556 sites across the state in phase 1. In phase 2, another 4,425 miles of secondary road maintenance projects at 3,522 sites have been completed.

The state used supplemental appropriations during the special session to fund $98 million in secondary road maintenance between last fiscal year and the current fiscal year that started in July. The state also purchased more than 280 pieces of road maintenance equipment, such as dump trucks, steam rollers, Gradall excavators, and highway mowers.

The Governor’s Office and the Department of Transportation did not return messages requesting comment.