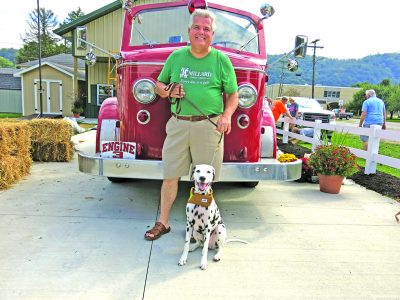 Photo Provided Brilliant native Reid Millard takes a moment with Tiltonsville Volunteer Fire Department mascot Blaze in front of one of the historic fire trucks that the new Battalion 1 Firehouse is showcasing. Blaze, a Dalmatian, is owned by Tiltonsville fireman Gary McHugh.

Awestruck — that’s how some visitors may feel when they enter the new Battalion 1 Firehouse museum in Brilliant, dedicated to the preservation of historic fire engines.

Vibrant photos of the firefighting world line the walls, and there will be an authentic fire pole, sourced from Las Vegas. There is even a unique piece of local history, an antique barber chair used in Yorkville. The main attraction, though, will be the vintage fire trucks housed there.

The new Battalion 1 Firehouse held its grand opening Saturday with a parade at 1 p.m. and a ribbon-cutting ceremony at 2 p.m. Trophies were awarded to participating fire department units.

Millard is the son of William and June Millard and is one of eight children. He attended Buckeye North High School and Wheeling Jesuit University as well as mortuary school in Houston, Texas. He left the Ohio Valley in 1990 and relocated to Missouri, where he is now the president and owner of Houser-Millard Funeral Directors, which is based in Jefferson City, Missouri, and has 10 locations. He became interested in firefighting while in Ohio through his babysitter’s dad, Andy Enoch. He was in both the junior and senior fire departments in Brilliant and is now in an emergency medical service in Missouri.

Millard explained his motivation for building Battalion 1 Firehouse in Brilliant and the genesis of firefighting.

“You want to try to preserve the history of your industry. It goes back to the Ming Dynasty of China, where they would have big, 6-foot tall containers of water that their servants would use to put out any fires,” he said.

Millard enjoys history and restoration and has a horse-drawn 1870 S&S funeral coach that he said was used for the reburial of Jesse James and a 1914 funeral coach. In his spare time, he enjoys auto racing and competes at the Pittsburgh Motor Speedway.

Millard’s Battalion 1 Firehouse museum will help to preserve historic fire engines, two of which it will house — a 1971 Mack fire truck once used by Wells Township Fire Department and a 1951 American LaFrance once used by the Tiltonsville Volunteer Fire Department.

Gary McHugh, president of the Tiltonsville Volunteer Fire Department, has been one of the caretakers of the 1951 fire truck and recounted how it made its way to Tiltonsville, then out of the Ohio Valley, and back again.

“The truck was manufactured in Elmira, New York, and was delivered by rail to Pittsburgh then by rail to Wheeling. It served the Tiltonsville Volunteer Fire Department from 1950 to 1983, when it was retired. A group of us firefighters bought it, then it was sold to a firefighter in Columbus, then another person bought it. That person offered it back to the department three years ago and we bought it back, then Reid (Millard) bought it,” McHugh said.

McHugh said the truck has been featured in two books on historic fire trucks. He said he enjoys the excitement the vehicle brings to people, especially when they see his Dalmatian, Blaze, riding proudly in its open cab.

Millard took the 1971 Mack fire truck back to Missouri to restore it, and it was showcased Saturday at the opening of the museum along with the 1951 Tiltonsville truck. Also on Saturday, the museum held what firefighters call a washdown ceremony for the two vintage trucks as each fire truck was pushed into the station for the first time.

Millard has big plans for the Battalion 1 Firehouse.

“We plan to hold a parade each year and make it into a nationwide event,” Millard said.

Museum hours will be determined and announced at a later date, Millard said. The Battalion 1 Firehouse museum is located at 1002 Third St. in Brilliant.