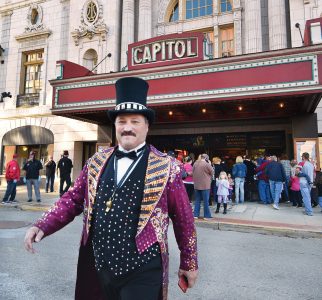 WHEELING – Despite some logistical challenges, for the first time in the history of the Capitol Theatre a circus was held on the stage of the downtown Wheeling venue Monday.

The decision was made to move the 2019 Osiris Shrine Circus to the Capitol Theatre because repairs need to be made to WesBanco Arena’s main floor. The work is needed due to a failure in the arena’s ice-making system that was discovered recently, according to arena Director Denny Magruder.

“To my knowledge, this is the very first circus ever held on this stage,” Magruder said. He said the promoter determined they would be able to present more than 90 percent of the regular circus acts on the Capitol stage.

“People are going to see a dynamite show,” he added.

Magruder said circus producer Jody Jordan is, in his opinion, the “finest circus producer in the world” and was one of the key reasons behind the decision to move the family event to the Capitol.

“He is no stranger to this. He’s done circuses before in different places,” Magruder said. “This was an emergency move, and it’s worked out pretty well.”

Patrons had a chance to witness everything from high wire acrobatics to a tiger performance as part of afternoon and evening performances.

Magruder said for obvious space and safety reasons, organizers provided the circus’s traditional elephant rides in an open parking lot located directly across Main Street from the theater. Earlier in the day, pedestrians were stopping at the parking lot entrance to catch a glimpse or photo of the elephants and tigers that were being housed in the lot. The circus elephants stood only about a block away from a stainless steel sculpture of an elephant in a sculpture garden along Main Street. The artistic sculpture was placed there several years ago and is a reminder of circus elephants that have visited the Friendly City over past decades.

Magruder said the tigers were securely transferred into a back entrance of the Capitol as part of the show.

“The elephants are across the street. … Elephant rides are available. It’s one of the popular attractions of the circus,” Magruder said, noting he expected both performances Monday to be well attended.