Children Taught Not to Touch Guns 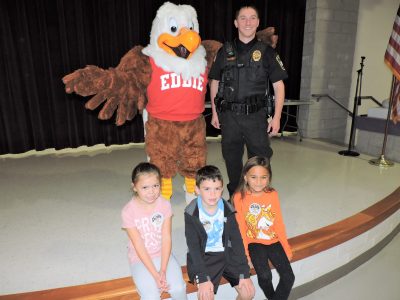 Posing with Eddie Eagle and Martins Ferry police Officer Robert Ney are Ayers Elementary School students, from left, Tenley Roth, 6; Brody Reasbeck, 6; and Samara Scheller, 7. The Eddie Eagle program taught children not to touch a gun if they ever find one and to tell a grownup about it immediately.

MARTINS FERRY — Martins Ferry’s elementary school students learned Monday what to do if they they see or find a gun. The lesson was given by Martins Ferry police Officer Robert Ney and the Eddie Eagle GunSafe program. The children watched a short video featuring cartoon Eddie Eagle and friends.

During the cartoon, the animal friends were playing in the park when they found a backpack under a bench. When they opened it, the youngsters debated what to do with the gun they found inside. With his sharp vision and hearing, Eddie, who is the oldest of the bunch, realizes what is happening and tells his friends not to touch the gun.

Ney said the department wanted to have the program at the school because there have been incidents in the past in which suspects running from the police have tossed firearms into areas where children could possibly find them.

Another message in the video noted, “Whether a gun scares you or not, you should always leave it alone.”

After watching the video, much to their delight the children were treated to seeing Eddie the Eagle in person. Eddie led the children in singing the song in an animated manner.

After the program, Ney said the police department wanted to educate the children in case they ever do come across a gun in their home, at a friend’s home or in a public place. Children, he said, often see guns in movies, on TV and in video games, but are not always educated about what to do if they see a real one. This program does that, he said.

Principal Nick Stankovich said Martins Ferry Police Chief John McFarland and Ney approached him about doing the program at the school, and he believed it was a good idea. The school, he noted, has training and drills for other aspects of safety, such as for fires and tornadoes, so it made sense to educate children about not touching guns.

The Eddie Eagle GunSafe Program was developed in 1988 and is sponsored by the National Rifle Association. The NRA recommends that if someone has a gun in their home it be stored so it is “unaccessible to unauthorized users and especially children.” Guns also should not be loaded when not in use. Ammunition should be stored and locked separately from the firearm.

The American Academy of Pediatrics recommends that before letting a child play at a friend’s house, parents should ask the friend’s parents or caregivers, “Is there an unlocked gun in your house.” While such a conversation or question may seem uncomfortable or intrusive, it can save your child’s life. If a parent is not comfortable with the answer, they can invite the child to play or visit at their house instead. The AAP also states the “safest home for a child or teenager is one without guns.”

“Every day, 78 children, teens and young adults are injured or killed by guns in the United States. Children as young as 3 years may be strong enough to pull the trigger on a handgun,” the academy notes.

The NRA suggests parents talk to their children about gun safety to help “eliminate the mystery surrounding guns. … Make sure your child … does not mistake a real gun for a toy gun.”