Dungeon of Horrors Welcomes Visitors to Their Nightmares 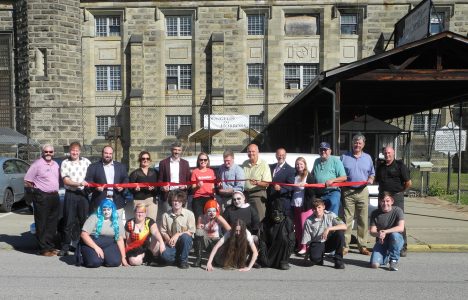 A ribbon-cutting ceremony was held recently to kick off the Dungeon of Horrors season at the former West Virginia Penitentiary.

MOUNDSVILLE – The former West Virginia Penitentiary once again is inviting thrill-seekers to walk its haunted halls during the seasonal Dungeon of Horrors.

The Halloween attraction continues to draw crowds from miles around, and West Virginia Penitentiary General Manager Amanda Wolverton expects crowds to pick up this weekend. The Dungeon of Horrors was modified from last year’s theme to be a little less “hellish” and a lot more nightmarish, she said.

“This is going to be kind of like the customer’s nightmare,” Wolverton said. “We’ve switched some rooms around, but our big elements are still there, added some different characters. … They’re still treated as an inmate in the very first part, but after that, you’ve died … and are just kind of stuck in your own demented mind.”

Wolverton said the haunted tours this year begin in the prison’s lobby — rather than customers being bused around the perimeter — to set the mood of the haunt.

It still utilizes the cells and the halls of the penitentiary where ghosts are said to frequent, inspiring the ghost-hunting tours that also are offered.

Wolverton ascribes the penitentiary’s enduring popularity as a haunted attraction to their variety.

“We do try to change it enough every year to keep it fresh for those regular customers that come every year,” she said. “They already know where the scares would be, so we always, always try to change that up for the returning customer.”

Wolverton said the Dungeon of Horrors employs a slightly smaller staff this year, compared to previous years, as their concessions are provided by Dixie’s Down Home Cooking, employing around 60 staff members.

As Halloween is on a Thursday this year, Wolverton said their busiest weekend is expected to be Oct. 18-19

However, due to the holiday’s near-weekend, haunted tours will operate Halloween through Nov. 2.

“We’re kind of dragging Halloween out a bit,” she said.

The Dungeon of Horrors is not accepting general admission this year, so interested thrill seekers are asked to register ahead of time by calling 304-845-6200 or going online to www.wvpentours.com.