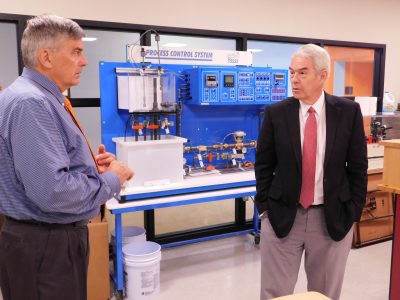 ST. CLAIRSVILLE – Ohio Department of Higher Education Chancellor Randy Gardner toured Belmont College on Wednesday as part of his tour of all of Ohio’s colleges.

College President Paul Gasparro took Gardner on a guided tour of facilities and programs. Gardner also met and spoke with some of the seven student ambassadors who attend the front desk of the college and viewed the renovated building.

“We love being at Belmont and get to be a big part of it,” one ambassador, Emily Street of Jacobsburg who is in the dental hygienist program, said. “I love taking the classes here.”

Many of initiatives Gasparro pointed out on the tour were made possible with grant funding. Belmont College has received more than $380,000 in grant money from the Ohio Mid-Eastern Government Association and from the Regionally Aligned Priorities in Delivering Skills program. Such grants have allowed Belmont to upgrade labs focused on building preservation/restoration, civil engineering technology, criminal justice HVAC, industrial electronics, medical assisting, nursing and welding. Gasparro showed the chancellor new equipment purchased for fields such as radiology, as well as courses related to the energy industry.

“I believe this is one of the best things a new chancellor can do is to make himself aware of the schools that he’s responsible for, coming around and seeing what each of us does special for each of our areas,” Gasparro said prior to the tour. “What we’re really looking forward to is showing him how we are putting state and federal funds to use for the students.”

Ed Mowrer, operations manager of the college’s energy institute, showed Gardner programs related to the energy field. He said while Belmont College does not have a course devoted to natural gas and oil, related applications are integrated within the energy programs classes.

“It was nice to be able to show off some of our stuff. … It was nice to have him interact with students and ask them what they wanting to do and planning to do,” Mowrer said.

Gardner said he was impressed by the college’s progress in providing training to meet the new employment needs of the area.

“I met with students here today that are really on the cutting edge of being able to be part of this region’s workforce,” he said. “This is going to be an attractive place for people in this region, both for students and for older adults who want to upscale or retrain.

“They’re seeing the very near future where Belmont students are going to be so prepared to take advantage of the benefits of the oil and gas industry and the expansion that’s coming, that’s already here to some degree, but the expansion that’s going to come in the future, they’re going to be so well-prepared,” he said. “Belmont … is seeing the floor. They’re seeing what’s going to happen a play or two down the road and they’re getting their players, their students, ready for the future. They’re going to be so well-prepared for the opportunities to come.”