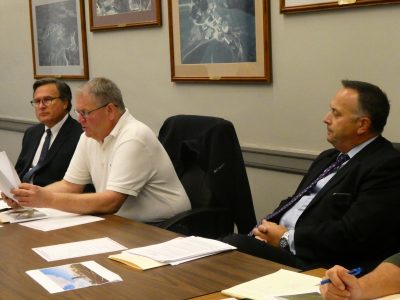 WHEELING – Preliminary planning for a second interchange at The Highlands is now underway.

Members first gave their approval toward a purchase of $4 million in environmental credits so environmental permits can be secured more quickly — perhaps within the next six months to a year, according to Commissioner Randy Wharton, who serves as OCDA president.

Authority members next approved a plan to work with the Trans-Canada natural gas company to move a large gas line near the Silgan building at The Highlands to make way for an access road to the interchange along Storch’s Run.

Wharton explained years ago the county filled in a stream bed in the area when The Highlands was first being developed, and now the county is required to do mitigation to make up for that move.

It could be time consuming to obtain the necessary permits to the mitigation, he said.

“There now exists a program where you can buy into projects already completed, or ones that are planned in the future,” Wharton said. “So instead of going out in the future, we can just pay for some that have already been done. It speeds the process up for permitting.

“What would have been a three-year permit is something we could get quicker today.”

Work to do the necessary mediation along Storch’s Run can start after permits are obtained, he said. The permit should come within the next six months, and probably no longer than a year from now.

The county also has come to an agreement with Trans-Canada to move the gas line, according to Wharton. The 16-inch high pressure pipe services much of Ohio County.

The line will be lowered from its current position high on a hill above the Silgan building. Not only will this help to make an access road leading to the future interchange, but it will also allow the county to flatten the hill and make room for about 120 acres of additional development, he said.

The cost for the moving is not yet final.

“We will still have money to begin construction on the road when that time comes,” Wharton said.