Ultimate Homecoming At Our Lady of Peace School 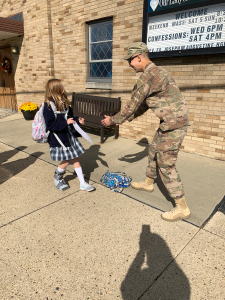 Our Lady of Peace School is celebrating homecoming season like never before. There weren’t any fancy dresses, bow ties or football, but there was an abundance of love, smiles, bear hugs and tears of joy.

Not one, but two families were reunited with their U.S. Army Reservists.

“We are thrilled that our families are having the ultimate homecoming,” Principal Maureen Kerr said about the Potts and DeSantis families at Our Lady of Peace.

Army Spc. Timothy “Parker” Eure surprised his siblings James and Kayde Potts (sixth- and fifth-graders, respectively) on Thursday afternoon at dismissal. Eure was deployed as part of Operation Inherit Resolve in Syria and Iraq for the last 342 days. His little sister was counting.

“It’s been a whirlwind,” said Elisha Carl, Eure’s mother. “Two weeks after graduating from high school, he went off to boot camp and Advanced Infantry Training. He came back and enrolled in the Hobart Welding School in Troy, Ohio, but only completed one year before he was deployed (with the 779th Engineer Company out of Parkersburg). I can’t express how grateful I am to have him back home.”

Staff Sgt. Matt DeSantis was deployed in Cuba for the last 11 months, which was 11 months too long for his second-grade daughter Berkley.

This is DeSantis’second deployment with the 305th Military Police Company of Wheeling.

Berkley proudly paraded her dad through the halls of OLP Thursday morning. When he was gone she would report into Kerr’s office to let the office staff know how many weeks were left “until Daddy gets to come home.”

The students in third grade teacher Morgan Allman’s class stopped what they were doing when they saw DeSantis and stood to shake his hand, each telling him, “Thank you.”

“We all have been praying for our deployed family members here at OLP,” Allman said.

“Our students get it,” Kerr said. “We have a lot of families who have loved ones that are active in the military or are veterans. We are so proud of that.

“We don’t take off Veterans Day here at OLP so that as a school family we can honor those who served and are serving,” Kerr said, noting last year more than 40 veterans attended a special assembly at the school with their family members.

“This special back-to-back homecoming reminds me of the song our students featured in a video we made last year showcasing our loved ones in the military,” Kerr said. “The song was ‘Soldiers and Jesus,’ it was written by James Otto. Its lyrics are hit home and take your breath away when you think about them. The song’s chorus is…

“There’s only two people who’s ever died for me, laid down their lives so I could be free. They both went through hell bared crosses and shells and both got back up again after they fell. They never pick a fight, but they’re there to pick up the pieces. God only knows where we’d be without soldiers and Jesus.”

The school’s theme this year is Anchored in Christ, Kerr said. This homecoming is a fitting example of how these two families stayed firm and secure during a time when their patience and faith could have been tested.

Eures is the son of Curt Eure and Elisha and Mike Carl of Wheeling.

DeSantis is the son of Jim and Jane DeSantis of Wheeling.