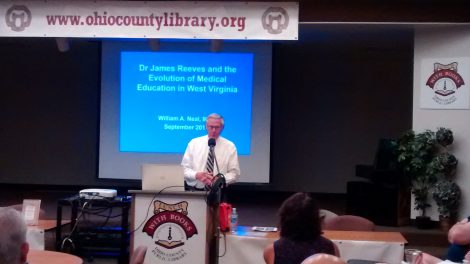 WHEELING – A pioneering Wheeling physician led the fight for licensure of doctors in West Virginia and, by extension, for nationwide requirements.

Dr. James Reeves, a highly academic practitioner and distinguished doctor in Wheeling in the mid-1800s, helped transform medicine into a legally recognized profession.

Neal talked about Reeves’ contributions during a recent appearance at the Ohio County Public Library’s Lunch With Books series.

Neal, who retired from the practice of pediatric cardiology five years ago, said James E. Mohr’s book, “Licensed to Practice,” focuses on Reeves.

When Reeves entered medicine, there were three classes of practitioners: medical school graduates, apprentice-trained doctors and “snake oil people” who had no formal education in medicine, Neal said. Reeves graduated from the University of Pennsylvania in 1860.

Reeves, who was scientifically educated and strong-willed, had “a burning desire to see medicine practiced by those who had formal medical education,” the speaker said.

“His practice was based on scientific principles that were emerging at the time.”

At the time, leading physicians in Wheeling had attended “real” medical schools in the East, Neal said. In 1880, the West Virginia Legislature created a Board of Health and established licensing requirements, largely through the advocacy of Reeves and Dr. George Baird of Wheeling.

Controversy erupted when Dr. Frank Dent of Preston County was declared ineligible for licensure. He and his uncle, attorney Marmaduke Dent, appealed the decision to the West Virginia Supreme Court, which upheld the ruling in 1884.

Dent appealed to the U.S. Supreme Court, which upheld the state ruling in 1889.

West Virginia was the first state to enact licensing laws, a move that led other states to implement similar rules over the next decade.

Reeves also advocated for the establishment of a county health department, based on his experience of managing a typhoid epidemic early in his practice.

“He was one of the country’s experts on how to address typhoid fever from a public health standpoint,” Neal said.