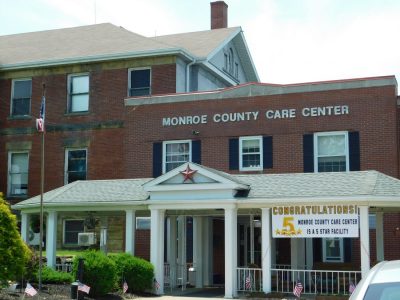 The Monroe Care Center is on the path to private ownership. The commissioners Tuesday took another step in selling the facility.

Commissioners Carl Davis and Tim Price voted in favor of a purchase and sale agreement and an operations transfer agreement with Bryan Casey, president of Alternative Living Solutions, who intends to purchase the center. Commissioner Mick Schumacher, who has opposed the sale, abstained.

They will send the paperwork to Casey to sign. This will begin the final phase of the transfer.

Price gave a tentative closing date of Dec. 16. He expects the commissioners will receive a response from Casey later this week.

The agreement will then be public knowledge.

Casey is purchasing the 166-year-old professional rehabilitation and nursing services provider for $500,000.

Recent years have been difficult for the historic structure, with the commissioners investing more than $6 million to keep it operational. Much of the investment came after it lost its certification to treat Medicare and Medicaid patients in 2015. The center regained certification in 2017 and has since earned a five-star rating from the Centers for Medicare & Medicaid Services.

However, it had still been a cost to the county. The prospect of closing the care center has brought crowds of residents’ family members, employees and their family members to commissioners meetings to express their dismay and ask county leaders to find a way to keep it open.

They explored privatization. Price said he believes this the best course of action.

“I personally think this is in the best interest of the county as a whole, a well as the residents of the care center and the employees. To divest ourselves of the ownership and operation of the Monroe County Care Center,” he said. “I’ve felt that way for quite awhile.”

He said the latest census counts 45 residents at the 60-capacity center, similar to prior months. The managers and residents had hoped the facility would be self-sufficient once more. Price said the commissioners have received a request for advance funding of $2,100.

“(That amount) is very, very small when you look back at the amounts of prior cash advances,” Price said.

The sale has garnered some opposition. Carson McCurdy of Jerusalem had put forward a counter-offer, going as high as $650,000 and offering to donate 10 percent of any net profit will go to local churches, charities and volunteer fire departments within the county after one year. McCurdy has said the commissioners should have placed the care center out to bid before agreeing to sell it, and had filed suit at one point to stop the process. He later dropped the suit so he could attempt to negotiate a sale.

Price had said Casey has superior experience in operating such a facility.

Afterward, McCurdy said he disagreed with the commissioners’ business decision but intended to make an offer to Casey to either finance the purchase or to buy the center from him outright. He said the price if Casey were to agree to sell or his interest in the center should Casey agree to an offer of finance would be negotiated.

“I’d be more than willing to consider Mr. Casey if he needs funding. I’d be glad to go ahead and finance him,” McCurdy said. “It was unfortunate that the county commissioners were not able to achieve a much higher price. … My intentions are as always to go ahead and make it a viable, profitable institution.”

In other matters, the commissioners heard from Ohio University Extension Office Associates Mary Jo Westfall and Jennie Shaw, who spoke to them about an OSU Extension renovation project to install new Skype and business phones at their office at no cost to the county.

“It will be more uniform throughout the state, in every extension office in every county, so that our IT in Columbus and pinpoint any problems we may have, because we’d have all the same basic equipment,” Westfall said.

They also discussed how to conduct the upgrades without interfering with courthouse operations and county phone services.

Westfall also thanked the voters for passing a 0.7-mill levy renewal on the recent ballot, which passed with 70 percent of the vote.

“We’re very thankful for the voters for doing that. It passed in every precinct,” she said. “We get funding for another five years.”