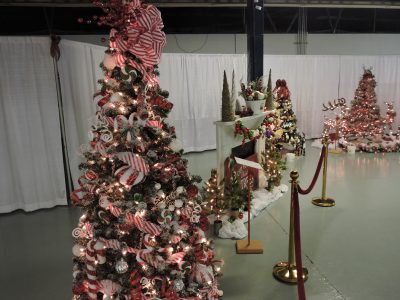 At the Training Center building at the former West Virginia Penitentiary in Moundsville, 18 Christmas trees, seven wreaths and two mantle decoration sets surround the dining area where potential buyers will gather Thursday evening. Proceeds from the auction will go to the Marshall County Chamber of Commerce, and a portion of the proceeds will go toward the Moundsville Veterans Honor Guard.

Chamber Executive Director Scott Reager said the honor guard is a boon to the county and will benefit greatly from the help.

“They do so much for the community with the amount of services and ceremonies they perform. It’s unbelievable,” he said. “They’re having struggles with their van, and their uniforms cost so much — it’s something to help them out.”

The layout of the gala will be different this year, Reager said, with the trees forming a perimeter around the tables and a stage in the center.

Local businesses decorate the trees, with the trees themselves provided by the chamber. The following day, Marshall County Schools assists by transporting the trees to their new homes.

“It’s actually a fundraiser for us, and a portion of the proceeds go to charity,” Reager said.

The chamber also will be hosting its annual Christmas parade on Nov. 23. It starts at 6 p.m., beginning at the intersection of Second Street and Jefferson Avenue.