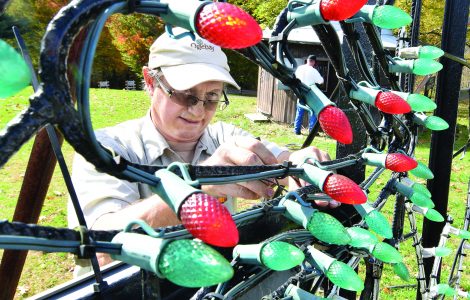 Denny Reynolds, a part-time electrician, rewires part of the dinosaur display this past week for annual Winter Festival of Lights.

WHEELING — More than 300 acres of Oglebay’s landscape will come alive with twinkling light displays as the annual Winter Festival of Lights kicks off for the holiday season Thursday evening as park crews are working diligently now to set up displays and stringing lights.

As thousands of visitors flock to this popular holiday attraction each year, park officials are making final preparations to officially flip the switch for this year’s festival at 6 p.m. Thursday. This nationally-acclaimed light show, which has illuminated the historic park since 1985, will continue through Jan. 1.

Part-time electrician Denny Reynolds was busy rewiring part of the dinosaur display on the observatory field this past week, while on a nearby hillside just below Wilson Lodge, about a half dozen maintenance workers assembled and hoisted the “Winter Village” scene in place.

The Festival of Lights has grown into one of the nation’s largest holiday light shows, attracting more than 1 million visitors each year. The light show, which features over a million LED lights incorporated in 90 displays displays and trees that cover more than 300 acres over a six-mile drive through Oglebay Park continues to be a year-round effort and collaboration, according to Curt Byrum, Oglebay’s Director of Operations.

Festival of Lights Foreman Harry Himrod, who has worked with the festival since its inception 34 years ago, echoed Byrum’s comments, saying there is a lot of work involved with maintaining the festival.

“We have to put them up. We have to take them down and we refurbish them,” Himrod explained, adding that every year there are at least several displays that are in need of refurbishing. “The (electrical) sockets go bad. The wire ties go bad. It’s nothing to put four or five hundred wire ties on one display. So we have a lot of that to do.”

In addition, Himrod said the light show is refreshed annually with new twists. He said site preparation always comes into play anytime they are setting up new displays or moving them to new sites. He said the mostly pleasant and dry October weather has created more favorable conditions for crews setting up this year’s displays.

Back by popular demand, Oglebay will once again enhance the show with holographic eye-wear which transforms every point of light into a magical display. With the return of those 3-D ‘Sleigh Bans,’ the 2019 Winter Festival of Lights promises to be even more stunning.

“This holographic technology adds a new perspective to the show,” said Oglebay’s Senior Vice President Rod Haley. “Over the last couple years, with the conversion of the show to LED and RGB lights, we’re now able to enhance the show in new ways. It’s an exciting new twist,” Haley added.

“A few years ago we installed the Rainbow Tunnel above Schenk Lake,” Byrum explained. “That was our first foray into RGB lighting, which allows the bulbs to fade seamlessly into an array of colors. It’s pretty amazing – and we’re now applying this new technology to more and more displays. This year, for example, we’ve revamped the Light & Music Extravaganza light show at Oglebay’s Good Zoo to include RGB lights choreographed to the music of popular holiday artists like Trans-Siberian Orchestra. It’s going to be truly spectacular.”

To Byrum and his crew, it’s a year-round labor of love.

“There’s so much more involved than just setting up displays and taking them down. Our crew takes great pride in presenting a truly amazing show year after year,” Byrum added.

In addition, visitors to the park can also browse eight unique retail shops, meet Santa’s reindeer at Oglebay’s Good Zoo, enjoy enchanting train and wagon rides at the new Frosted Hilltop attraction or take a picture with Santa during scheduled visits. For information about the Winter Festival of Lights, visit www.oglebay.com.