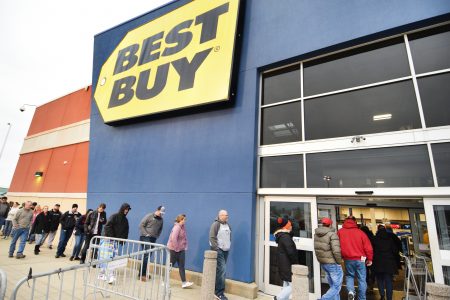 Shoppers stroll into Best Buy at The Highlands to take advantage of the store’s Black Friday deals.

TRIADELPHIA — Many Black Friday shoppers took to The Highlands in Ohio County to take advantage of hot deals during what is an annual tradition for many local shoppers that ushers in the Christmas shopping season.

While many people huddled in their cars in the parking lot to avoid the near freezing temperatures early this morning, nearly 1,000 people made their way through the doors of Cabela’s at the store’s 5 a.m. opening Friday to take advantage of many of the store’s hot deals, according to Group Sales Manager Sheri Palombi.

“It was amazing. There was almost a thousand people here,” Palombi commented. “People are going really crazy buying buggies full of stuff.”

In addition to the many store sales, Palombi said families will stop by Santa’s Wonderland Workshop to either let their children visit with Santa or spend some time coloring and eating cookies with the store elves.

At the nearby Best Buy store, several dozen people either waited in line outside the store entrance or sat in their cars waiting for the 8 a.m. store opening. Standing first in line at Best Buy since 6 a.m. was Adam Taylor of Washington, Pa., and his son Ethan, who said they were waiting to take advantage of some great deals in the store.

They said they were specifically interested in hot deals on a large screen TV and a specific computer.

“This is the second year we came down here,” Taylor said.

He said his wife and daughter decided to head north toward Pittsburgh to take advantage of Black Friday deals, while he and his son decided to head west to The Highlands to find bargains. He said they plan to meet up at home later in the day to see who got the best deals.

“I’m pretty sure we won this year,” Ethan Taylor said with a big smile.

While J.C. Penny opened at 2 p.m. on Thanksgiving Day, and has stayed open since, there was a constant flow of foot traffic through the front doors of the store Friday morning.

While shopping at J.C. Penny, Tia Burkhead of St. Clairsville said she really enjoys the tradition of shopping with family on Black Friday.

“The part I like about it is — we come as a family,” Burkhead explained. “There are five of us. … We just laugh and carry-on. We get so tired, we get giddy.”