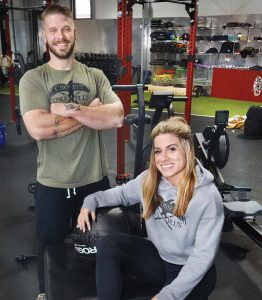 Celebrating their one-year anniversary at a location near The Highlands in Ohio County, CrossFit Unus Plus owner Chad Blanchard and trainer and strengthening coach Alison Schuster welcome new members to their gym.

WHEELING – Celebrating its one-year anniversary at a location near The Highlands in Ohio County, CrossFit Unus Plus is a business which offers a variety of workout routines tailored to individual needs.

Speaking from experience after working for several different gyms in Charleston, South Carolina and one locally, owner Chad Blanchard said he saw a need for a CrossFit type of gym near the continuously growing Highlands complex in Ohio County.

Working along with CrossFit Trainer and Strengthening Coach Alison Schuster, Blanchard, a CrossFit trainer himself, said his gym offers “Cardio Chaos,” a fitness program which makes his gym stand out from the rest.

The workout is tailored to each individual in a class setting for them to receive an effective workout, according to Blanchard. He said the movements in the one hour program are designed to be easy to understand, and Blanchard said they use a variety of training equipment in the Cardio Chaos workout, with the exception of barbells.

Both Blanchard and Schuster bring plenty of experience to the business. Blanchard competed in the 2016 and 2018 international Reebok CrossFit Games in Madison, Wisconsin, and Schuster has been nationally ranked in her weight class in weightlifting.

“Those two things are a big deal. And what also separates us is we have the experience as far as the competitive side … and we also have a broad range of techniques and ways to train,” Blanchard said.

Going into the holidays and new year, Blanchard said people often make a resolution to improve their physical fitness.

He said one of their goals at CrossFit Unus Plus is to help people fulfill those goals and work at keeping a healthier lifestyle. The gym is currently offering a discount for the month of December for new members.

“The community up here is so incredible. … It’s an awesome place,” Blanchard added.

Located at 839A West Alexander Road, near The Highlands, the gym offers a large variety of training equipment to work with, including Rogue Echo bikes, Concept bikes, rowers, skiers, barbells, dumbbell sets and other equipment.

Those interested can sign up for one of the classes offered Monday through Saturday or for personal training by appointment. For more information about their hours of operation, or to sign up for a class, call 570-637-4800.