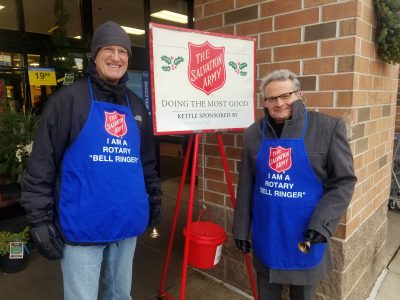 WHEELING — Bitter cold and a few snow flurries last week couldn’t keep an army of Salvation Army’s bell-ringers from rolling out their red kettles around town.

“It’s the fastest hour I’ve ever spent,” Vic Greco of Wheeling said Wednesday after finishing his shift. “We just chatted away.”

Greco, a member of the Salvation Army of Wheeling’s advisory board, and fellow bell-ringer, Gary Kenamond, were volunteering their time as members of the Rotary Club of Wheeling. Kenamond spent a decade on the advisory board before leaving a couple of years ago.

“They do great work in the community,” Kenamond said. “It’s fun to be a small part of it. It’s a way of giving something back.”

The Salvation Army’s national Red Kettle Campaign began on Thanksgiving and will continue through the holidays. Those red kettles placed outside grocery and retail stores are important reminders that there are many people in need, according to Capt. Mark Van Meter, who leads the Salvation Army of Wheeling.

“Most of us have the ability to go home and climb into bed,” Van Meter said. “We don’t always think of the people who are climbing into a tent or using a stove to heat their house.”

Van Meter and his wife, Jennifer, moved from Louisville, Kentucky, in June after spending several years there. That city’s population is 22 times larger than Wheeling, but donations here still have a huge impact on the community.

“It doesn’t change the fact that each community has needs, depending on their size,” Van Meter

In fact, 86 percent of every dollar raised in Wheeling stays here, Van Meter said. Those “direct contributions” can go a long way locally, he said.

He said the organization discovered when the country is struggling economically, the kettle campaign does better because even people who are feeling the financial pinch are motivated to help others even less fortunate. But even during a strong economy, there are some in the community who still need help, making the fundraising drive just as critical.

He noted a larger homeless population in Wheeling due to its location on a major interstate, along with various resources available to the most vulnerable in society.

The kettle campaign in Wheeling hopes to raise $80,000 locally, which Van Meter said is “ambitious, but doable.”

And there are other ways to help, too.

The Salvation Army has 400 angel ornaments with a child’s name and his or her needs inscribed on each one of them. Those who want to help can take an ornament from one of two Christmas trees located at JC Penney and Walmart until Dec. 12. The toys or other goods requested can then be dropped off at those two retail locations, or at the Salvation Army’s office at 140 16th St. in Wheeling before the Dec. 16 distribution day.

The Salvation Army once had a motto that “need has no season,” and Van Meter said that is particularly true nowadays. That’s why the red kettle campaign is so important to year-round services and highlights the importance of the volunteer bell-ringers.

“Just to spend an hour (ringing a bell at the red kettle),” Van Meter said, “it’s a good feeling.”

Anyone who would like to volunteer to be a bell-ringer, help with the angel tree program or donate in other ways can call 304-233-4400.