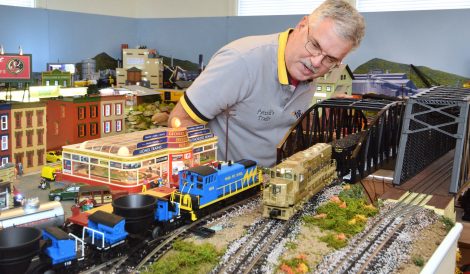 Photos by Scott McCloskey Local model train “master craftsman” Eric Freeland looks over the large train display he has been constructing for a North Wheeling resident.

WHEELING — Mike Greenwood said he still has fond memories of being a youth decades ago and riding on a freight train that was hauling coal from Bellaire to Holloway with his father serving as an engineer for the Chessie System.

Those memories continue to this day as Greenwood, a disabled veteran, has asked local model train “master craftsman” Eric Freeland to construct an elaborate model train display on the second floor of his North Wheeling home with the “mixed assortment” of model train cars and pieces he has collected over the years.

Complete with extensive trackwork, scenery, bridges, trestles, waterways and customized buildings with special effect lighting — Freeland has been working several days a week over the past few weeks with the help of co-worker Ed Roberts, to construct the dazzling one-room display.

Both Greenwood and Freeland share a passion for model trains and the creativity an elaborate display can spark. While Greenwood gained a love of model trains from an early age — Freeland’s appreciation began about 25 years ago when he built his own outside “garden” train display at his Wellsburg residence where he operates a berry farm during the growing season. Freeland said it was about 15 years ago when he first gained an interest building large scale model train displays for customers as a winter season business. He said he has constructed nearly 35 large scale displays over the past 15 years for many different customers, including Murray Energy.

“I farm by summer, and at the end of October we park the tractor … and we put the tool belt on and build train layouts from November to April,” Freeland explained. “So literally we stop farming one day and start on a railroad (model display) job the next day,” he added.

Freeland said Greenwood contacted him to see if he could construct a large display in his house — something that has always been a life-long dream of Greenwood’s.

“We have all been working together to make this happen. So we’re working for Mike, and we have been down here for about three weeks off and on,” Freeland commented. “I try to give the customer the biggest bang for the buck. We try to put as much action in with thoughts of what (theme) the customer wants,” he added. He said they built a variety of interesting details into Greenwood’s display, including “some coal activity,” a steel mill and a local power plant. The display detail is tremendous — showing everything from a glowing cigar on a miniature figure to the lighted sparks of a man using a jackhammer on a water break street scene.

Freeland said he truly enjoys the creative challenge of building displays from an empty room while adhering to budget and time constraints. He said he collaborates on the design of displays at least several times a day with his customers to make sure they are happy with the end result. Freeland said he doesn’t believe there is any other individual in the area who constructs large train layouts for local residents at their house.

Greenwood said he has been a fan of model trains since he was a child and he has accumulated a “mixed assortment” of engines and cars over the years.

“I’ve always been a train fan. We had Lionel trains when we were kids,” he commented.

He said he enjoyed riding with his father on coal runs.

“Back then there was three seats on the engine,” he explained.

Greenwood said since that time he has collected many train display pieces over the years — many of those at Patrick’s Trains shop located on 29th Street. He said he extremely pleased with how the display turned out and he can’t wait to invite family and friends over to enjoy the amazing display — complete with all the bells and whistle sound effects and special lighting.

“I think it’s wonderful. He does good work and he’s got some good ideas,” Greenwood commented.