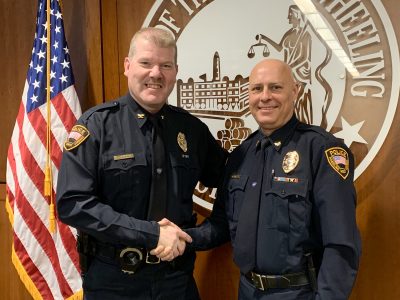 Noice, a 20-year veteran of the force, assumed his new duties Monday.

He previously served as a lieutenant overseeing the department’s training and fleet division.

“I’m honored to have Chief Schwertfeger and the Wheeling Police Department’s confidence in me,” Noice said.

“I’m ready to get started in this new role.”

Noice will be responsible for overseeing the department’s daily operations and will serve as the commander of patrol operations – which includes the K9 Unit, SWAT Team, Training Division and Special Operations.

“Deputy Chief Noice has been and will continue to be an outstanding asset to the Wheeling Police Department,” Schwertfeger said. “He epitomizes the WPD core values, is responsible, has tremendous work ethic, is respected amongst his peers and is a truly trusted member of my command staff. He excelled at the recent Deputy Chief Assessment that was conducted and impressed the panelist from the West Virginia Chiefs of Police Association. I look forward to watching him continue to grow as a leader and to the many successes which will be coming to the WPD.”

He served in the U.S. Marine Corps and continues to serve with the West Virginia Army National Guard.

He is a veteran of Operation Iraqi Freedom.