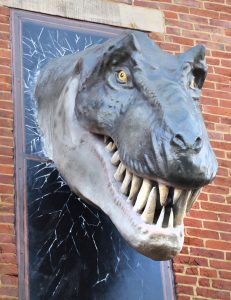 The Tyrannosaurus rex at the SMART Centre Market has been christened with the name Gideon.

WHEELING — The Tyrannosaurus rex bursting through the second floor window on Market Street at SMART Centre Market now has a name — Gideon.

Forty-eight different classes of elementary students from 22 schools participated in the naming contest. The class of students submitted a name with a 50 words or less reason for choosing the name.

Gideon won by a nose. This name was submitted by Julie Loy’s fourth-grade class at Ritchie Elementary School. The students said that Gideon Mantell was the first to discover dinosaur fossils (an iguanodon tooth, specifically). This discovery was in 1822 when Gideon and his wife, Mary Ann, found the then unidentified tooth in England.

Every T. rex should have a nickname, so the name will be Gideon AKA T-bone. T-bone was a close second in the votes for the T. rex name. The third- and fourth-grade classes at Martins Ferry Christian School and teacher, Darla Hennen, simply said “Who doesn’t love a good T-bone?”

Each teacher of the winning class will receive a $100 gift certificate to SMART Centre Market and the school will be eligible for a schoolwide program by the center.

The Wheeling Heritage Corporation, Centre Market merchants and others who helped in the naming decision were also thanked for their support.