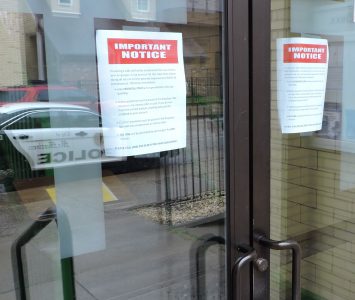 The McMechen City Building is closed to the public until further notice due to the coronavirus outbreak.

McMECHEN – Residents took to social media to observe that a gathering was held at the McMechen City Building over the weekend while locals were advised to hunker down in their homes, but city leaders say the event was on the level.

Last Wednesday, McMechen officials announced the city building would be closed to the public and that the gym would not be available for any reason, effective immediately. However, a small birthday party was seen being held at the gym attached to the building on Saturday, drawing scrutiny on a McMechen community Facebook group. Several residents expressed dismay at the apparent lack of caution displayed by allowing the event during a public health crisis, while others countered that those involved seemed healthy and that canceling the party would be distressing for the 4-year-old birthday participant.

Mayor David Goddard said Monday that the gym was actually only to be closed to the public effective at the end of the day Saturday, which was backed up by the city council minutes from Thursday’s meeting, despite the wording of the announcement.

He added that the party consisted of 10 people, all family, which was not a large enough event to warrant cancellation. Other groups scheduled to use the gym, such as informal pickleball and men’s basketball teams, had larger numbers and had cancelled their events on their own, Goddard said.

“These folks are kind of making a big deal out of something, where there were less than 10 people there Saturday, 99% of the time,” he said.

Goddard added that city officials would be determining new health and safety standards after a conference call with Gov. Jim Justice on Monday afternoon.

“We’re not under quarantine as of yet, the governor hasn’t issued that … and we should have some more standards after that. I closed the city building last Tuesday, to keep the public away from my workers, and I had informed council that, after (last) Saturday when the gym was closed down, it would be for good, for now.”

On Saturday, the Marshall County Health Department announced that two cases of COVID-19 were identified in the county, infecting a husband and wife. At the press conference, health officials advised the public to continue practicing social distancing and avoid crowds.

According to the governor’s office, 16 cases of COVID-19 had been positively identified statewide as of Monday afternoon.