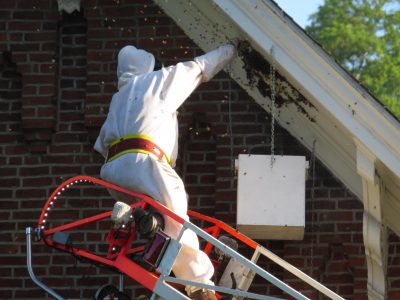 Bill Cox works to remove a beehive on the exterior of Short Creek United Methodist Church. A West Liberty Volunteer Fire Department vehicle was pressed into service to reach the beehive several stories above the ground.

Trustees had been working on restoring windows at the Short Creek church that sits along North Fork Road, when they were greeted by a loud buzzing noise. High up under an eve they found a sizable bee hive.

Ashley Mazzella, a trustee at the church, said they knew the hive had to be removed for safety concerns and the possibility of the bees doing damage to the structure.

Mazzella put out a social media message seeking advice. She didn’t have to look far. The Rev. Debra Dague, West Liberty University campus pastor and pastor of the West Liberty Federated Church, saw the post and set a plan into motion. Dague is a member of the West Liberty VFD and enlisted the aid of Fire Chief Bob Fowler and member Bill Cox.

Cox also is a beekeeper and has experience with handling bees of his own. Mazzella said they brought a ladder truck from the fire department to the church on June 20 during the evening when the bees were less active.

Cox wore his beekeeper’s outfit and went up on the ladder several stories high above the ground to reach the beehive. After some maneuvering, he was able to bring the hive down without disturbing the bees too much.

Mazzella documented the process via photos she took along the way. She said the bees were only on the exterior of the building. Cox was able to safely remove them and add them to his hives. But the bee issue is not over.

Inside the attic area of the church, they discovered a large honeycomb that measures about 5 feet in length. Cox is now working on a plan to safely remove the honeycomb.