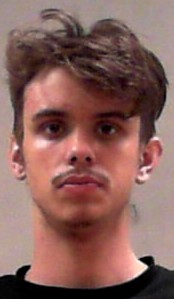 BETHLEHEM – A Brooke County man faces felony charges after allegedly leading police on a high-speed chase through two counties at more than 100 mph, which he later told arresting officers was “fun.”

Ohio County deputies joined the pursuit, where police say the chase continued at over 80 mph on the narrow county roads near Ye Old Country Church, where the speed limit is 40 mph. The pursuit came to an end on East Bethlehem Boulevard, near the Hanger Clinic.

In court documents, police identified Landon Hollis, 19 of Follansbee, as the driver. A 16-year-old passenger was present in the back seat, while another passenger was not identified by police in the complaint. Police say Hollis showed no regard for the safety of the public, nor for the other occupants of the car. The car was also found to have a false license plate.

While in custody following the high-speed, police said Hollis told them that he’d been drinking throughout the night, and that during the chase he’d ditched marijuana he allegedly possessed, according to court documents.

“Hollis also stated that ‘eluding the police should be made less illegal, because it is fun,'” the complaint states.

Hollis was charged with reckless fleeing from an officer and gross child neglect creating risk of injury, both felonies. He had not posted $10,000 cash-only bond by Thursday afternoon and is being held at the Northern Regional Jail. A preliminary hearing date was not immediately set.