Pitching In to Help During St. Clairsville Flooding 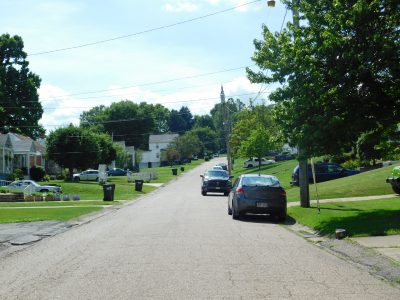 Bellview Street was flooded again this past Saturday after heavy rainfall, and city leaders pitched in to help. There are long-term plans to install backflow-prevention valves and study the infrastructure to prevent flooding of several homes. The mayor also reminds residents there will be no fireworks this week, but a July 4 parade is scheduled for Saturday.

ST. CLAIRSVILLE – Many who could pitched in and lent a hand during heavy rainfall this past weekend. Mayor Kathryn Thalman and other city leaders joined in on Saturday.

“Bellview Avenue and Sugar had a lot of water at the bottom of the sewers at the intersection,” she said. “I got a phone call about it from (Councilwoman) Terra Butler…she was on the scene. I called (Director of General Services) Don Smithberger…I jumped in my car and went over.”

“There was like a river at that intersection and two of the sewers were all backed up with leaves and branches, so I just stepped into about four inches of water and started pulling it out by my hands and got it cleared and the water drained,” she said. “(Councilman) Perry Basile was out helping, (Police Officer) T.J. Steward…We got a good team … We’ve got an awesome city crew. … We were covering the bad places.”

“We’ve got some wonderful people on council, wonderful police officers, and I’ve always been kind of a hands-on person,” she said.

The several houses on that street often report flooded basements. Thalman said this was another such occasion. The issue of flooding in the lower parts of St. Clairsville is a frequent topic among council members. Recently, engineer Jeff Vaughn has proposed installing backflow valves.

Thalman said Vaughn is studying plans of the streets. They may also scout out the system under the streets for root balls that are hampering water flow.

Thalman is also alerting residents there are no fireworks planned this week due to the COVID-19 coronavirus pandemic. She said there have been rumors of a display.

“That is tabled with the COVID stuff and I don’t know where it’s coming from, but there will be not be fireworks,” she said. “We do not want bunches of people over here not keeping social distance and then have no fireworks.”

Thalman said the city’s annual Community Day and fireworks had been planned for this week but was canceled. The city is considering a fall festival, but this will depend on what is possible and permitted.

“This COVID situation is so dynamic. The numbers are going back up and things that were opened are now being closed again. We can’t promise for sure, but if the trajectory goes down and things are allowed to stay open and we can gather, then yes we will have a fall fest. As for right now, we can’t really say,” she said.

Plans are also ready for a July 4 parade through town this Saturday, with the route to be announced soon.

“We don’t want people clustering in one place, so we’re going to take it through town so everybody can stand near their yards,” she said.