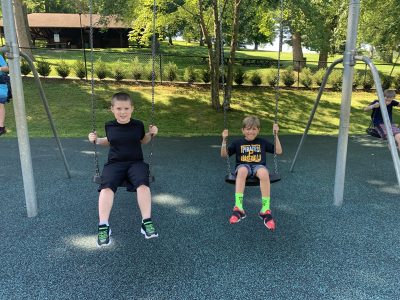 Nathan Weaver, left, and Trevor Hinerman swing on the playground Wednesday after the camp opened this week.

WHEELING – After initial uncertainty regarding whether summer camps could operate within social distancing guidelines, the Wheeling Park Day Camp opened to campers Monday.

The camp’s opening was delayed until Gov. Jim Justice announced on June 8 that summer camps would be permitted to open this week, giving Wheeling Park staff time to work out how to best protect campers this summer.

The day camp has introduced several new rules to prevent the spread of COVID-19, said Kristen Espina, one of the camp supervisors.

As staff, campers and parents arrive at the park each morning, they are given temperature checks and asked routine questions about their general health before they can participate in activities, she said. Counselors are required to wear masks in enclosed spaces, though masks for campers are optional.

Espina also said every counselor carries hand sanitizer at all times, and more restroom and handwashing breaks have been added to the daily schedule to ensure proper hygiene.

“We are also encouraging social distancing, but it is harder with kids,” she said.

Traditional camp games have been modified to allow for less physical contact between campers, Espina said. The camp is not permitting children to use the park’s paddle boats, as it is not possible for campers to maintain proper distance while riding.

However, Espina said she felt campers were still enjoying themselves, despite the new regulations.

“Most of the kids are aware of COVID-19, but they aren’t scared,” she explained. “We have a lot of kids who come to camp every year, so we’re doing our best to make the experience as fun as past summers.”

This summer, the camp has noticeably fewer attendees. Espina said that there are only about half as many campers as last year. She said the most drastic change is within the camp’s oldest age group, ages 11 to 13, which is practically “nonexistent.”

Espina said it is possible the camp might see an increase in attendance as summer goes on and more parents head back to work.

Jitesh Pujara, one of the day camp counselors, said that, for now, the smaller number of campers at least makes it easier for staff to monitor the kids and keep them safe.

The day camp will run every week, Monday through Friday, until August 7. Anyone interested in signing up for the camp should contact the main office of the White Palace.